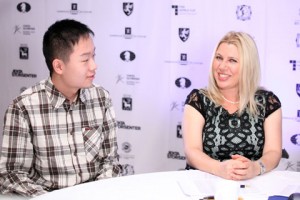 14-year-old Chinese GM Yi Wei, who pointed out during the press-conference that
this was his biggest success so far

The Chess World Cup 2013 in Tromso, Norway, presented the chess fans with multiple surprises right from the start.

Chessdom warned about the rising star of the Chinese youngster Wei Yi (here, here, and here). Being just 105th seeded out of 128 players, Wei Yi showed spirit in round 1 defeating the 24th seeded and proven top Grandmaster Ian Nepomniachtchi. The total score of the match is 1,5-0,5 after a draw in the first game and a win with black for Wei Yi in the second game.

Judit Polgar, the strongest female player in the history of chess, lost out on a number of winning chances, drew against Cuban GM Isan Reynaldo Ortiz and lost the match.

Joining the surprising elimination was Russian GM Daniil Dubov who managed to outplay experienced and higher rated Ukrainian GM Sergey Fedorchuk. In the battel of the young talents, Wesley So defeated the World Junior Champion Alexander Ipatov after a win with white and draw with black.

28 matches were undecided after two games at the classical time control and 56 players will continue to fight at 15:00 CET on August 13. You can follow the games live with analysis here.

Russian GM Alexander Morozevich taking a walk as Norwegian GM and former football
player Simen Agdestein arrives by bike. Both players lost their first games, but Morozevich
managed to equalize the score after losing the first game to force a playoff.

Judit Polgar and her husband walking before the second game. She got very good
chances to win the game and equalize the score but unfortunately let
her advantage slip in a queen endgame.

All the players are checked before they enter the playing hall.

Ukrainian GM Alexander Areshchenko is ready to be checked.

GM Michael Adams made a second draw against Wan Yunguo of China .

Ian Nepomniachtchi is knocked out by…

…14-year-old Chinese GM Yi Wei, who pointed out during the press-conference that
this was his biggest success so far.

Ukrainian GM Vassily Ivanchuk outplayed Polish IM Jan-Krzysztof Duda, who upset him with a
draw the day before.