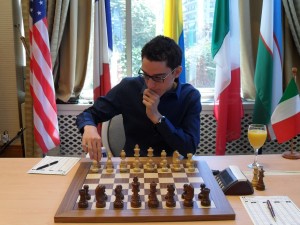 Chessdom: Hello Fabiano, you had a very difficult tournament in some games, but with a great finish. What are your impressions from the Thessaloniki Grand Prix?

Caruana: Some games were good, some were not really good, and at times I was tired and nervous. As a result in the last games, with the exception of the very last one, I was much worse. Against Topalov I was clearly losing, also against Grischuk. I was lucky to have 1,5/2 from these games, I could have easily made zero points. Against Dominguez it was a clear draw and I totally ruined it trying to win too hard.

My level was not perfect, it was not so bad either. I was not thinking about winning the tournament, but +4 is a quite good score. Normally I would expect to win with +4, but this is how it happens.

Leinier Dominguez had a great tournament, +5 is an incredible result and he was the deserving winner.

Chessdom: After the loss against Dominguez, how did you find strength and motivation to continue pushing the last two games? Especially against Topalov it was a wild game!

Caruana: I do not know if I was pushing, against Topalov I was mainly trying not to lose. In the end when I had chances I took them, although of course it was a crazy and lucky game for me, any result could have happened.

Chessdom: You are also playing in the 5th and 6th Grand Prix (note: 5th Grand Prix is in Beijing). You still have a strong position to qualify for the Candidates.

Caruana: I will play the Grand Prix in Beijing and the one that is supposed to be in Paris. I have been quite consistent in the last two events, I tied for third in Tashkent and also tied for third in Zug. My position is not bad, but Topalov won two events and it will be hard to catch him.

Chessdom: After this events you are fourth in the live rating list, when do you expect to make another step to the third or maybe second place?

Caruana: Live rating is changing daily, you can go a few positions up or down and I try not to concentrate on that. But of course I am happy that I increased my rating. The Tal Memorial 2013 is very soon and I will be playing again the top players in the world, so we will see. 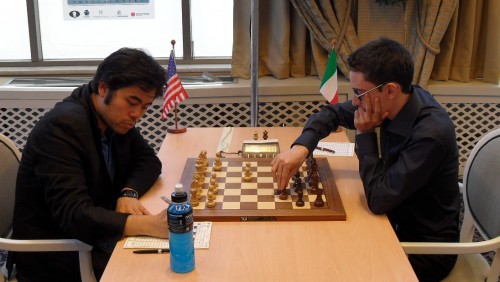 Caruana will soon be in action again at the Tal Memorial 2013, where he will meet again Nakamura and many of the top players