Alexander Kostiev, Director of the international chess festival Moscow Open, spoke about the peculiarities of organising and running such a large-scale tournament.

Eldar Mukhametov: Alexander Nikolaevich, how did the idea of this festival originate?

Alexander Kostiev: The festival was born thanks to the idea of connecting the establishment of the Chess Department in the Russia State Social University with running of the national tournament among students and pupils. Afterwards the Chess Federation of Moscow suggested that we extend the format of the festival to include adult competitions.

Q: It is not easy to organise such a large-scale competition. Could you please tell us about the preparation for the tournament?

A: Now everything is going according to existing plan. All services are running smoothly. But, as before, a lot of time is spent on correspondence with Russian and foreign participants, visa procedures and accommodation arrangement. Moscow Directorate for Sports and Entertainment Events is providing significant help. It covers the organisational expenses: hall decoration, welcoming and accommodation arrangement for the guests, advertising campaign. 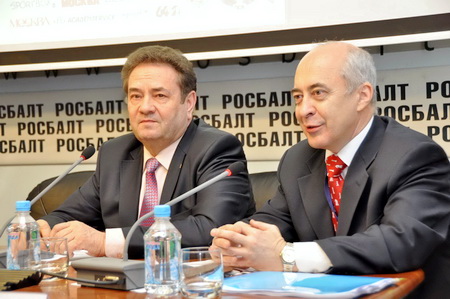 Vasiliy Zhukov, President of Moscow Chess Federation and Rector of the RSSU, and Alexander Kostiev

Involvement of the Directorate also gives the festival a special status. Moscow Open is included on the list of the most important social events of the city. The list of these competitions is approved by the mayor of the city. And this allows the tournament to get good support.

It is not by accident that Moscow Open has permanent location at RSSU. It was a continuation of significant work on chess popularisation that has been conducted at the university in the past years.
The chess department of RSSU is almost 10 years old, and a number of young talented Grandmasters, including the members of the national team Sergey Karjakin, Ian Nepomniachtchi, Valentina Gunina, Olga Girya, study here.

The university provides a prize fund and accommodation. It is quite a big problem to accommodate 1500 participants in one venue. For example, there is a wonderful hall in the Martial Arts Centre but its renting would cost around one million Rubles.

We play in study halls. But there is a problem here – the games are played on study desks. And it is not that we cannot buy ordinary chess tables. It is just not possible to remove all the study desks from the halls – we simply don’t have enough storage spaces for this. But participants don’t complain. And the conditions for the main tournaments are of a high standard.

A: The festival has now a new name – RSSU International Cup Moscow Open 2012. By this we are coming back to the origins, when student sports and our substitution – school sports, was the cornerstone. Over 500 children, selected for the European and World school championships, take part in our competition. This year we have a whole block of tournaments for students.

Grandmasters and International Masters, university students are invited to take part in highly ranked round robin tournaments with significant prizes and an opportunity to get the highest chess title. Apart from this, we run an open tournament for students – young men and women – with lots of prizes too.

We don’t forget about chess amateurs who don’t have international titles. The festival offers them their own tournament that also gives an opportunity to win good prize money.

The highlight of the event is the World Chess Problem Solving Cup. This tournament has become very popular among those solving chess etudes, problems and compositions. Shogi and 100 squares chess variant tournaments are run as a part of the festival.

Q: In the past few years Moscow Open programme has been including not only the competitions but also the events for chess professionals. Can you please tell us a bit more about it?

A: It’s true that an additional business programme has become very important. We gave it the status of professional development courses, and all the participants get state approved RSSU certificates.

The course programme includes seminars for coaches, arbiters and organisers that are very beneficial for its participants. Those who have initial arbiters’ categories can upgrade them through the Russian Chess Federation. And the applicants who already have a national category can pass the exams to get a FIDE arbiter title. Chess tournament organisers may be interested in listening to the professionals experienced in organising large-scale chess events. There is a whole range of issues to consider here. It’s not so easy to run a good tournament.

A: The Directorate always organises very colourful opening and closing ceremonies at our festival. At the opening ceremony the participants are guests are offered demonstration of the film on the tournament history.

I think people like our festival; otherwise we would not have around 1500 people gathered here every year. Every year its results are discussed in media and on the web forums, and not only in Russia but abroad.

We don’t run any significant advertising campaign; everything has its natural flow. We have quite democratic condition, we reject almost nobody. We have arrangements with the hotels about significant discounts. And the entry fees are also not so high. For example, they are much higher at Aeroflot Open, the tournament following ours. It is not a commercial tournament, and we are not aiming at making money.

The entry fees are used for welcoming foreign and non-Moscow based chess players, and also for development of chess in Moscow including the prize funds of the Moscow Championships among women, men, veterans.

Kirsan Ilyumzhinov, the president of the International Chess Federation, is a regular guest of our festival; Anatoly Karpov, a multiple world champion, often takes part in the opening and closing ceremonies. It’s worth mentioning that our tournament is well-known around the world.

Q: As of today Moscow Open is one of three largest chess festivals in the world. Do you think that one day a number of participants might reach 2000 people and, let’s say, Vladimir Kramnik will take part in it?

A: At RSSU we can accommodate 1000 chess players in one shift. Usually we have about 1000 adults (evening shift) and over 500 children (morning shift). So we have some reserves.

As for the top chess players, we are not planning to run a super tournament. Although last year the winner of the grandmaster competition among women was Alexandra Kosteniuk; it was the first time that the player from the world champion cohort was playing here…I think that RSSU Cups will most likely attract the world champions among students and young promising chess players.