Several years have passed since Garry Kasparov quit competitive chess after the Linares chess tournament. Since then he has entered and actively participated in the world of politics. This March Kasparov will stand behind the chess board again! He will participate in a simul with twenty five U2000 players.

The simul with Kasparov will take place in one of the most beautiful castles in Southern Czech Republic and Western Europe in general – Hluboká nad Vltavou. Kasparov has played earlier games in the Czech Republic, but has never been to the castle itself.

This famous place started as a Gothic castle about 1250. It remained a Royal property and administrative center until 1562, when it was turned into a stately Renaissance chateau. In 1841 it was rebuilt again onto today’s picturesque Tutor Gothic style, very similar to the Windsor Castle in England.
Currently the castle is full of art pieces, artifacts, and interesting woodworks – one of the richest and most amazing chateaux in Europe. It is definitely a place to visit and why not combine it with Garry Kasparov simul! 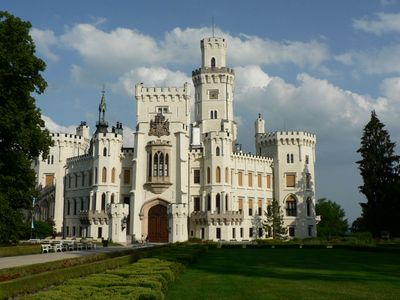 The Hluboká nad Vltavou castle, where the simul with Kaspaarov will take place

Information on Garry Kasparov in the Czech republic from Viktor Novotny. Expect more updates on Chessdom.com!