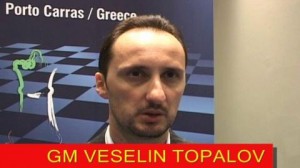 Veselin Topalov gave an extensive interview for Standart daily right before the start of the prestigious tournament Tata Steel Chess 2012 in Wijk Aan Zee. While waiting for the pairings tonight we present you a translation of the interview, where Topalov speaks about his expectations from Wijk Aan Zee, the possible Bulgarian bid for Candidates, and his view on the Anand – Gelfand 2012 match.

A: I did not play too much last year and there were not too many successes. I did train a lot, but unfortunately, some of the tournaments I planned to compete in were not held because of the financial crisis. I am not happy about that, but on the other hand I had more time to relax. I travelled and lived life to the fullest (laughs).

A: Silvio and me went on tour of Ireland and the islands of Guernsey and Jersey. Then we went to the wedding of Teimour Radjabov in Azerbaijan, which was wonderful. I have never been to that country. It was a very enjoyable journey indeed.

A: On the 12th, I am going to a tournament in Wijk aan Zee. Big periods of time without any action are not very good. Afterwards, I have no plans. I will probably receive an invitation from Romania for a serious competition. We will see how the rest of the year unfolds.

Q: Is it true that your play in Wijk aan Zee will probably determine whether Bulgaria will bid for the Candidates tournament?

Q: How did you prepare for Wijk aan Zee?

A: When it is known who is helping you prepare, you can become predictable. This is why I chose someone from France for this tournament…

Q: After the loss from Anand for the World Championship, there were rumors that you had no motivation. Have you gained it back?

A: I love to play when I am in good shape. When I am not in good shape, I get angry at myself. In Greece, at the European team tournament, I did pretty well in some of the matches. That was the first tournament after the loss from Anand, where I actually played at my usual level.

Q: Are you mentally prepared for a new race for the World Championship?

A: The Candidates Tournament will be at the end of the year and I will have plenty of time to prepare. Except for Carlsen, the rest of the contenders are not much younger than me. So if we are talking about age, there is no obvious winner.

Q: If Bulgaria is host of the tournament, you are participating as a representative of the host country, but the bids are to be submitted by the end of January, right?

A: That is true, but the deadlines can be stretched. If it is decided this way, I will do everything to prepare as best as I can. I think I have good chances, but the tournament is very difficult. There are three Russian players, although I do not think they will team up against the others. Also, Danailov’s influence is growing. Kirsan Iliumjinov is a wise politician. I do not think he will give Bulgaria such chances. I think in 2014 the only alternative for a FIDE president is Silvio Danailov.

Q: Do you have the strength for a new important match at home?

A: I have always said, when you win, it is better to win at home, when you lose, you want to be far away from there. But you cannot predict such a thing.

Q: Have you seen Anand after those games in Sofia?

A: Yes, we saw each other in China and Monaco. But Anand is passive; he does not attempt to organize any tournaments in India. In contrast, Gelfland who is out of the top 10 easily found some funds for the World Championship. This shows how unprofessional Anand’s team of managers is. There should be a supertournament in India; they have the resources to do it. Also, Anand is like a God in India. If the world champion’s country does not participate in the development of the sport, then we have a problem. And India is a country that is not currently in financial crisis.

Q: What kind of match do you expect between Anand and Gelfland for the World Championship title?

A: It will not be interesting. I think people underestimate Gelfland, but he is not the favorite; I cannot remember when Gelfland has last beaten Anand. But Gelfand plays better at big tournaments and a lot of characters. Still, I would not put my money on Boris.

Q: Is there a possibility that Gelfland invites you to his team?

A: He will receive some good support from Russia. It is not normal to invite a player who is ranked higher than you. It happens rarely because you will get to play against him later, you will both know the details of your play.

Q: You made a big splash in the chess news when you transferred to the Azerbaijan “Socar” club. How did you accept?

A: I normally do not play for clubs. When I was world champion, I did not have the time. Club tournaments were not interesting to me. “Socar” has long been the most professional club. They have not yet won the European Club Cup and I decided that this year it is time for that to happen. Our roster is made up of chess superstars. Radjabov is the team leader and representative of the sponsor company. During his wedding, we talked about not only me joining, but also lifting the cup as a team. I personally wanted to help the team win it. We have talked for years about that. Radjabov and Silvio have a good relationship and he easily agreed to it. The team also has representation in Georgia. They are the ones that sponsored the 2011 Women European Tournament and helped it out a lot, since Turkey declined the sponsorship at the last moment.

Q: You have a made a big step forward in your personal life as well. How do you like being a married man?

A: I enjoy it. Holidays here in Spain are very demanding though. They start on December 24 and end on January 6 when the Three Kings give their presents.

Q: What was your gift under the Christmas tree this year?

A: Christmas is more a children’s holiday. We do not have a tree at home. This year we had a small USB-powered tree.

Q: Did your wife learn some Bulgarian traditions for the holidays?

A: Yes, we had a “kozunak” with fortunes inside. My wife and I decided to spend next Christmas in Bulgaria.

Q: What fortune did you get from the kozunak?

A: Nothing. But I did get a digital Christmas tree with fortunes in it and I got the most important blessing: good health.

Q: Do you do any work around the house?

A: I cannot cook, but I clean and do other easy tasks.

Q: Did Christina adapt to your chess life?

A: Yes, simply when she goes to work, then I start to work myself.

Q: There are rumors that you are going to be a dad. Are they true?

A: Yes, I heard those as well. I do not believe they are true, since my wife has not told me yet! (laughs)