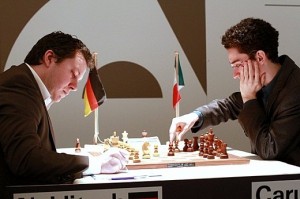 The 8th round of the Grenke Chess Classic has begun. Fabiano Caruana is leading the field and today faces one of his strongest rivals, Arkadij Naiditsch. If this game has a decisive result, it might affect greatly the final standings of the tournament.

Naiditsch chose the Exchange Variation of the Spanish, and the fight has become strategic. The Italian has the bishop pair, but also has a damaged queenside pawn structure. After 17 moves, it is clear that the German is better prepared in this line, Fabiano has a 30-minute disadvantage on the clock.

The World Champion Viswanathan Anand is playing against the only winner of yesterday’s round, GM Georg Meier. The Indian chose French Defense where White castles queenside.

The third game of the round is the clash between Michael Adams, who is having a rather solid tournament, against GM Daniel Fridman, who comes from losing two games in a row. They play a Nimzo-Indian with a lot of exchanges early in the game. The endgame that has arisen looks quite drawish, especially taking into account the fact that both players are known for having good technical skills.