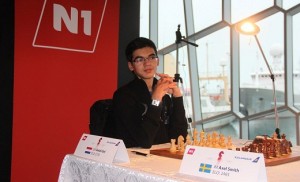 The Reykjavik Open continues and some very interesting match-ups are taking place.

The battle between the two world’s top juniors, Anish Giri and Alexander Ipatov, finished with a win for the Dutch player. Giri, who will turn 19 this year, spent very little time from his clock to beat the Turkish.

The game started with a Caro-Kann Defense and the players quickly simplified the position. Anish demonstrated his superiority in the endgame, which he handled with precision while almost blitzing the moves. This puts the Nr 1 seed on 4.5/5 points with a lot of chances to claim the first prize.

The four players who arrived to this round with a perfect score are facing each other. Grzegorz Gajewski was satisfied to sign a draw with the white pieces against Yu Yangyi after just 18 moves.

On the other hand, Maxime Vachier-Lagrave is trying to squeeze a victory in a difficult endgame against Pavel Eljanov.