The Saint Petersburg Chess Federation team took first place on tiebreaks in a dramatic last round. Despite losing their first match of the event, they were lucky that Malakhit could not beat the SHSM “Nashe Nasledie”.

Peter Svidler, the first board of the champions, obtained a winning position against Baadur Jobava, but was not able to convert it effectively and ended up drawing in 48 moves. The match was decided on the last board, where Ivan Popov beat Maxim Matlakov with white in a sharp struggle. 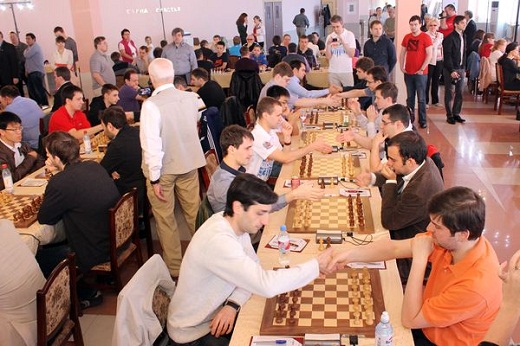 This result gave Malakhit the chance to take clear first place with a win over SHSM “Nashe Nasledie”. The young promise Daniil Dubov from the SHSM got a win against Viktor Bologan in 32 moves to put pressure on the favorites. Only Alexander Grischuk – who had a great tournament achieving a 2980 rating performance – did his job and defeated Ian Nepomniachtchi, but this was only enough to tie the match.

SPb Chess Fed and Malakhit finished with the same amount of match points, but the individual results decided who would take the first prize.