The 10th International Chess Tournament “World’s Youth Stars” Vanya Somov’s Memorial will take place from 11th to 24th May at the Palace of Culture KINEF in Kirishi, Leningrad region.

The tournament is a 12-player, single round-robin event, according to the acting rules of FIDE. It is possible to obtain IM norms. 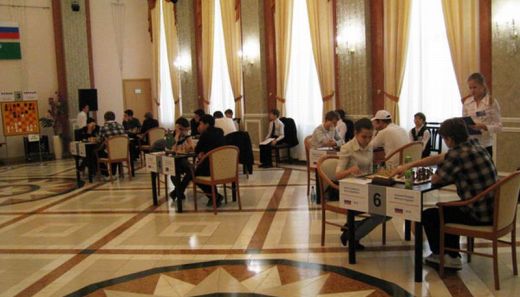 The playing hall in Kirishi

The “World’s Youth Stars” chess tournament is devoted to the memory of Vanya Somov (20 February 1990-31 July 2002). He could have rightfully been a participant of this representative competition. But Vanya’s star burned brightly and faded away having no time to shine in the sky if chess.

Though young, he was a rightful member of the team of the World champion 1999 Alexander Khalifman at the World Championship in Las Vegas, at the biggest International tournament in Linares (2000) at the math play with the leading young grandmaster of the world P. Leko in Budapest (2000).

In his chess biography he took part in such bright events as the Youth Championship of Russia (Sochi-2002), World Junior Championship (Spain-2000), International chess tournaments in Helsinki, Dortmund, Maintz, Sankt-Ingbert. He played for his school, town and Leningrad Region at the All-Russia’s competitions, twice he became the winner of chess tasks and etudes in the Academy of Chess Art in St. Petersburg.

Vanya was surprisingly talented and kindhearted boy with a big soul and a sunny smile.