Grandmaster Aleksej Aleksandrov of Belarus surged ahead with a hard-fought victory against International Master K Rathnakaran in the third round of the premier section of Parsvnath International Chess festival now in progress here.

Aleksandrov took his tally to a maximum three points out of a possible three and as other results came in, the Belorussian finds himself alone at the top of the tables in this strong event. 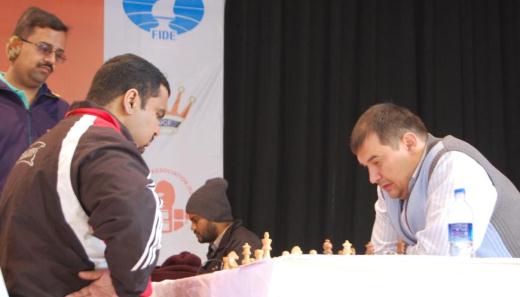 With seven rounds still to come, as many as 16 players follow the leader on 2.5 points apiece. Prominent among them are Grandmasters Marat Dzhumaev of Uzbekistan, Lu Shanglei of China, Raset Ziatdinov of United States, Niaz Murshed of Bangladesh and Indian Grandmasters M R Lalith Babu, Magesh Panchanathan and Sahaj Grover.

Aleksandrov did not have to exert much against Ratnakaran. The Grandmaster got a slightly better middle game and won a pawn with precise calculation to leave Rathnakaran helpless as the rook and minor piece endgame arrived.

Top seed Abhijeet Gupta meanwhile was held to a second draw in the tournament. The beneficiary was Ram S Krishna who had to defend a slightly worse endgame for a long time. Earlier it was a Catalan opening by Gupta that gave him a slight advantage which was not enough for a victory in the end. 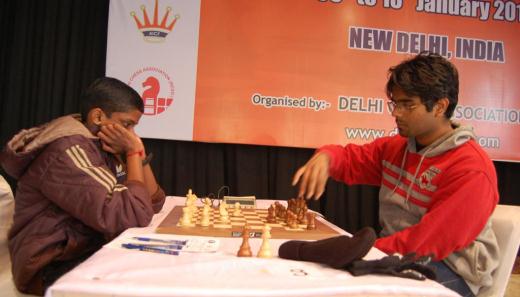 P Magesh Chandran caught Himanshu Sharma unawares in the opening itself and got a clear better position sooner than he had expected. “It was quite easy once I got better prospects, Chandran said after the game.

Sahaj Grover scored a fluent win against International Master Nisha Mohota from a Grunfeld defense game. Playing white, Nisha landed in to unexplored territory in the opening and was soon pushed in to an inferior position by Grover.

Amongst other Indians in the fray, Lalith Babu played out a draw with Kazakh’s Kirill Kuderinov while S L Narayanan achieved the same result against Ashwin Jayaram.

Former under-12 world champion Murali Karthikeyan came up with a good win at the expense of higher rated Akshayraj Kore while Arvindh Chithambaram, the youngest ever Indian Junior champion, did well to hold double Grandmaster norm holder Swapnil Dhopade.