Grandmaster Aleksej Aleksandrov of Belarus won the premier section of Parsvnath International Chess Festival after drawing with Grandmaster Henrik Teske of Germany in the tenth and final round that concluded here.

Aleksandrov finished with eight points out of a possible ten and finished clear first ahead of Marat Dzhumaev of Uzbekistan who finished second with best tiebreak score on 7.5 points. It turned out to be a three-way tie for the second spot and Teske finished third while Indian Grandmaster Vaibhav Suri ended fourth.

Marat Dzhumaev defeated P Magesh Chandran while Vaibhav Suri ended the party of K Rathnakaran who had made a Grandmaster norm after winning the penultimate round.

M R Lalith Babu, Lu Shanglei of China and M Shyam Sundar finished in a tie for the fifth spot winning their final round games with Jahongir Vakhidov of Uzbekistan, Akshayraj Kore and Kiril Kuderinov of Kazakhstan respectively. 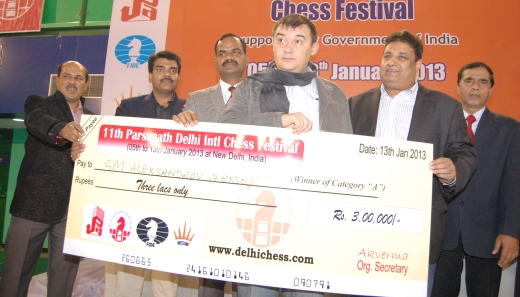 Meanwhile, Kumar Gaurav deservingly won the Category ‘C’ tournament of the festival that ended today. Bannerjee logged nine points out of a possible ten to pocket Rs. 100000/- winner’s purse out of a total prize pool of Rs. 600000/-.

The tournament produced an Indian record in terms of participation as in all 899 participants took part in three different categories. In terms of prize money offered too, it was a giant leap forward as the total prize fund of the festival was at 2.05 million Rupees, bettering the highest prize fund ever offered by over 30%.

The Delhi Chess Association is known to honour its stars and this time was no exception. Four players were felicitated with a cash award of Rs. 25000 each.

Grandmaster Abhijeet Gupta and Tania Sachdev were rewarded for their excellent show in the chess Olympiad where they won individual medals while Sahaj Grover got the honour for becoming the latest Grandmaster from Delhi. 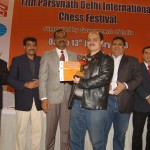 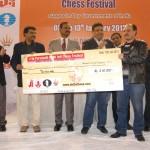 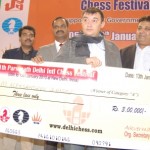 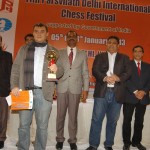 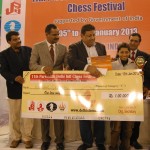