The top of the ranking table of Ikaros 2012 appears to be crowded since 5 players – Peter Prohaszaka, Ihor Nester, Giorgos Goumas, Anna-Maria Botsari and Panagiotis Christodoulou – are all leading with 6.5 points after 8 rounds.

With half a point less (6/8) there is a group of seven players following – Sotiris Malikentzos, Epaminondas Kourousis, Kleanthis Vafiadis, Maria Urosevic, Anastasios Papargyriou and Heini Puuska.

These 12 players are contending for the 1st place of this year’s “Ikaros” Open Aegean Championship.

Additionally, a lot of young players as well as veteran players are seeking medals in the 16 different age groups of the tournament, while female players and players from the Aegean region will also get their share.

The finals results of the last round (that starts at 11.00 a.m.) and the final ranking of the 137 participants will be announced at: http://www.chess-results.com/tnr76782.aspx?lan=1 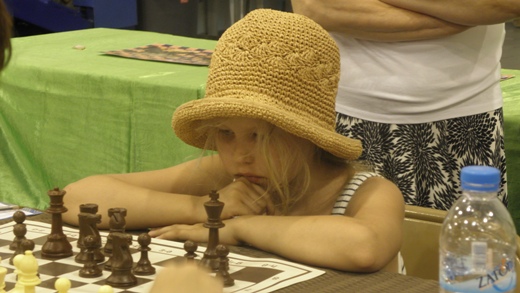 The annual Problem Solving Competition tends to become a tradition of “Ikaros”. This year’s competition included orthodox problems (mate in 2, 3 and 4 moves) chosen by Dimitris Skyrianoglou.

The competition was conducted by IA Ulysses Vazelakis.

The closing ceremony of the Open Aegean Championship “Ikaros” 2012, that was organized by the Municipality of Ikaria and the Ikaria Chess Club, together with the main sponsor of the event ANEK Lines will take place today at 7.00 p.m. at the Sports Center of Aghios Kirykos. The winners of all prize categories will get their trophies and, additionally, there will be some honorary awards.

On Sunday 15th of July the 3rd Mediterranean Rapid Team Tournament will be held, while, during summer, more chess events will take place as part of the centennial celebrations for the liberation of Ikaria in 1912.

Visit to the Folklore Museum of Ikaria

Yesterday morning, the vice president of the Cultural Club “Ioannis Melas”, Makoula Koumioti, escorted the participants of “Ikaros” 2012 to the Historical and Folklore Museum of Ikaria. There they were received by Themistoklis Katsaros, the creator of the museum, who for more that four decades collected all the exhibits of the museum by visiting all villages of Ikaria.

Mr. Katsaros shared his knowledge and passion for the Ikarian tradition and history with his visitors and showed them the exhibits explaining their original use and their historical value. He also shared with them some little known anecdotes about life in Ikaria.

The visitors had also the chance to see the transformation of the environment and settlements of Ikaria through a series of photos.