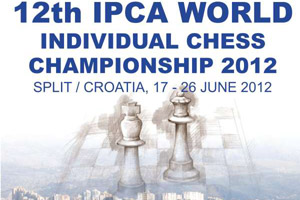 The 12th edition of the IPCA World Chess Championship took place in Split, Croatia, 17-26 June 2012. It was organized by the Croatian Paralympic Committee and the Chess Club for the Disabled Hvidra Brod.

The event was played according to the Swiss System in 9 rounds, with time control 90 minutes + 30 sec per move for each player.

More information at the official site of the championship.