Fresh from his victory at the Al-Ain Classic, Grandmaster and former world junior champion Abhijeet Gupta will spearhead the Indian challenge in the 12th edition of Parsvnath Delhi International Grandmasters Chess Tournament that gets underway here at the Ludlow Castle sports complex on Thursday.

One of the strongest events in the annals of Indian opens will see a total of 24 Grandmasters in the premier A Group that has 130 entries thus far.

There are 24 International Masters in the fray apart from one Woman Grandmaster taking the title holders tally to 50 in all.

The event will see an unprecedented over 1000 entries in the festival that surpasses the previous record of 899 participants in the previous edition of this annual event.

The event is also the highest prize money tournament of the country offering Rs. 23 Lakhs and laptops for the winners. There will be ten rounds in all. 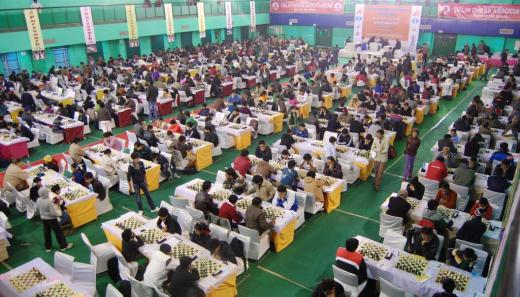 Grandmaster Martyn Kravtsiv of Ukraine starts as the rating favourite in the premier group while Grandmaster Levan Pantsulaia of Georgia is the second seed. Gupta will be seeded third.

The event will also see local stars Grandmaster Vaibhav Suri and Sahaj Grover in action in the premier event. The tournament will be played under FIDE’s Swiss rules and there will be 10 rounds in all spread over eight days.

The B section is open to players below the rating of 2000 and the C section is reserved for players rated below the 1600 mark.

In to its 12th edition, the Parsvnath Delhi International festival remains a favourite among Indian players. “The number of entries is indication enough that this is amongst the most loved events of the country”, said Mr. Bharat Singh Chauhan, CEO of All India Chess Federation and President of Delhi Chess Association.

This is the second back to back International event in the National capital region following the 2nd Gurgaon International Open that concludes in the Suncity School on Wednesday.

Ikaros 2014 – The spirit of Ikaria
Preparations for Ikaros 2014, the annual international chess tournament that is held for the 37th time at the picturesque island of Ikaria in Greece, ...