The 14th NordWest-Cup was held from 26th to 29th January in the “Wandelhalle” Bad Zwischenahns. The 7-round Swiss event was organized by the SK Union Oldenburg and SC Schwarzer Springer Bad Zwischenahn.

A total of 325 players competed in the Main and U1800 Groups. Among them were 10 Grandmasters with GM Yuri Solodovnichenko being the top seeded.

Five players shared the first place with 6.0 points each, but the trophy goes to GM Vladimir Epishin thanks to the superior tie-break.

Zotin Vladimir and Brinkmann Fabian shared the first place with 6.0 points each in the Group B with 109 players. 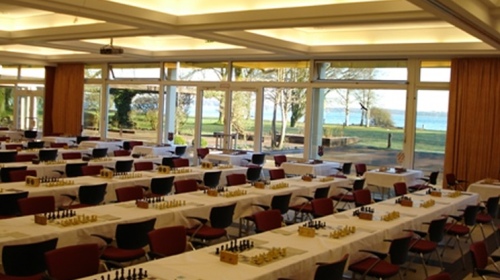 The playing hall with a view to the Zwischenahner Meer