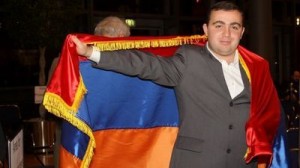 The Armenian Chess Championship 2013 will take place January 11-21, 2013. Ten of the strongest Armenian Grandmasters will compete in a round robin event for the title and a spot on the national team.

All champions from 2009 to 2012 are participating in the competition. Top seeded is the ex European Blitz Champion Hrant Melkumyan. His main opponent is the defending Armenian chess champion from 2012 Tigran Petrosian. Third by rating is the 2011 Armenian champion Robert Hovhannisyan. Fourth seeded is the 2009 Armenia Champion Avetik Grigoryan.

Here is the history of the Armenian chess championship. This year will be the 72nd editon of the tournament.