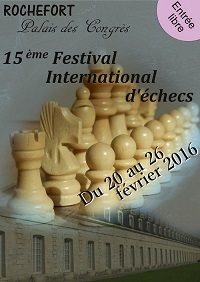 The organizers have invested big effort to propose an interesting event for all-level players.

More than 15 title norms were achieved since the beginning of the Festival.

The winner of the 14th Rochefort Masters was GM Eduardo Iturrizaga.

The tournament will be played over 9 rounds of Swiss system, with rate of play 90 mins for 40 moves + 30 mins to the end and increment 30 sec from move one. The total prize fund is 7000 EUR, with 1000 EUR reserved for the winner of Masters.

On Sunday morning there will be the traditional Blitz Tournament. 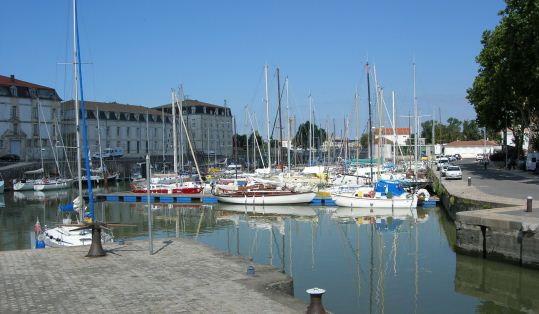 Rochefort is a port on the Charente estuary, in western France, home to unique bridge Pont transbordeur (built in 1900), Marine Museum, Conservatoire du Bégonia – the world’s largest begonia collection, and L’Hermione – replica of the legendary frigate built in 1779 in Rochefort.

In December 1665, Rochefort was chosen by Jean-Baptiste Colbert as a place of “refuge, defense and supply” for the French Navy. The Arsenal de Rochefort served as a naval base and dockyard until it closed in 1926.

In September 1757, Rochefort was the target of an ambitious British raid during the Seven Years’ War.

Another infrastructure of early Rochefort from 1766 was its bagne, a high-security penal colony involving hard labor. Bagnes were then common fixtures in military harbors and naval bases, such as Toulon or Brest, because they provided free labor. During the Jacobin period of the French Revolution (1790–95), over 800 Roman Catholic priests and other clergywho refused to take the anti-Papal oath of the “Civil Constitution of the Clergy” were put aboard a fleet of prison ships in Rochefort harbor, where most died due to inhumane conditions.

Off Rochefort, from the island of Île-d’Aix where he had spent several days hoping to flee to America, Napoleon Bonaparte surrendered to Captain F. L. Maitland aboard HMS Bellerophon, on 17 July 1815, ending the “Hundred Days”.

Rochefort is a notable example of 17th-century “ville nouvelle” or new town, which means its design and building resulted from a political decree. The reason for building Rochefort was to a large extent that royal power could hardly depend on rebellious Protestant La Rochelle, which Cardinal Richelieu had to besiege a few decades earlier. Well into the 20th century, Rochefort remained primarily a garrison town. The tourist industry, which had long existed due to the town’s spa, gained emphasis in the 1990s.