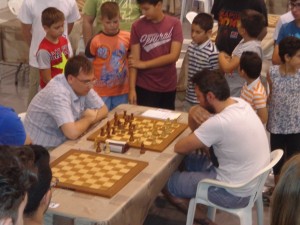 The Russian GM Alexander Kharitonov, first in the rating list of Ikaros 2016, plays a friendly game with the Ikarian chess player Giorgos Teskos

With 160 participants from all over Greece as well as from 13 foreign countries (England, Armenia, Belgium, France, Spain, Belarus, Montenegro, Holland, Russia, Sweden, Scotland, Czech Republic and Turkey) Ikaros 2016 commenced its journey. Among the 160 participants, 18 own an international title (5 GM, 5 IM, 2 WIM, 4 FM, 2 CM)

At the 1st round, where the opponents in most pairs have a large rating gap, 71 games ended with a decisive result (40 wins for white and 31 for black) and nly 2 games ended with a draw. Among the very few surprising results the win of the young playe of Ikaria Chess Club St. Halioris over the Belgian R. De Coninck stands out.
At the 2nd round (that was played on Wednesday (12/7) morning), the stronger participants prevailed over their opponents but here we also had a few surprises like the draws of D. Hatzihrisafis, E. Markesinis and G. Theoharidis with GM P. Velicka, IM D. Lekic and IM T. Karagiannis respectively.

At the 3rd round (on Wednesday (12/7) afternoon) the favorites prevailed again so the end of the round found 7 players sharing the first place with a perfect 3/3 score: (A. Kharitonov, V. Teterev, K. Georgiou, A. Pavlidis, P. Bonno, P. Romain and V. Kotronias).

At the 4th round the battles among the stronger players begin and the pairings at the first boards are: Kharitonov-teterev, Romain-Pavlidis, Kotronias-Bonno and Velicka-Georgiou.

The tournament takes place daily at the Sports Center of Aghios Kirykos. Results, standings and statistics can be found at Chess-Results (Group A here and Group B here)

It’s also worth mentioning that the chess fans all over the globe have this year again the opportunity to watch the games on the first 12 boards of every round live thank to the live transmission (check the links on the right column of the Ikaros webpage). Last’ years live transmission drew the attention of many Ikarians leaving abroad (especially in the U.S. and Australia) who praised the whole initiative. This year the live transmission of the games has been taken care of by Maria Petsetidi and Michalis Roukonakis.

Finally, the large number of participants and the considerable interest for Ikaros 2016 is a result not only of the efforts of all people working for the tournament but also of the websites that promote Ikaros like the greek skakistiko.com of Philippos Koerant and the international Chessdom.com of Anton Mihailov.