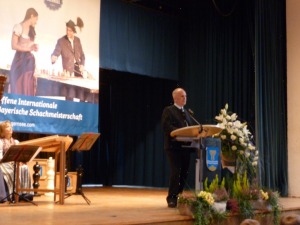 Horst Leckner at the opening ceremony

The traditional arbiter Horst Leckner has opened the event with a speech (as you can see on the picture), while the sunny Bavarian autumn weather welcomed the tournament guests.

The spectators are in expectation of interesting and thrilling chess duels, because many professional chess players are here for the hefty prize fund. However, only the winner will take the top prize of 2.500 €.

However, OIBM enjoys great popularity even among amateurs. The capacity of 480 places was already full by the end of the summer. Some of the players came to enjoy the beautiful lake Tagernsee, others – to fight for title norms, or just to have a chance to play against strong opponents, known only from the chess magazines or Internet.

The first round didn’t produce many surprises. The biggest one was the game of GM Konstantin Landa (2670) vs. Jürgen Seidel (DWC 1918), when the latter drew the game. However, Landa was the one to save to game, because the courageous Jürgen Seidel had the upper hand.

Attention, mobile phones!
According to the new 07/01/2014 rule of the World Chess Federation FIDE, mobile phones are absolutely forbidden in the playing hall, even when switched off. If a player is noticed with a mobile device, he will lose the game.

17th NordWest Chess Cup
The 17th annual NordWest Cup is now underway in Bad Zwischenahn, Germany till the 24th of January. 368 players are taking part in the ...