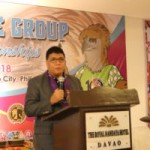 With 566 players from 12 countries, this year’s championship is the fourth biggest in history and once again the battle for bragging rights as the overall winners will be very much be between defending champions and host Philippines and perennial ASEAN chess powerhouse Vietnam.

Representatives of the Major of the City of Davao and the Philippine Chess Commission which underwrote the event were very much in evidence and demonstrated a strong commitment to the event in both words and deed.

On top of the ringing endorsements, the legendary Eugene Torre, Asia’s 1st Grandmasters, was nonetheless still called up to to further inspire the participants!

ASEAN Chess Confederation (ACC) and National Chess Federation of the Philippines (NCFP) President Prospero “Butch” A. Pichay Jr, also the Congressman from neighbouring Cagayan de Oro City, and very much a Mindanao native, was a very articulate keynote speaker, giving due credit to the parties involved in making the event happen while sharing his love of Mindanao and it’s capital Davao City.

In the closing remarks, ACC Founding President Ignatius Leong congratulated Pichay on his leadership and Davao City for its organisational excellence while recognising the critical role played by co-founder Dang Tat Thang from Vietnam for the survival and flourishing of the ACC and the ASEAN Age-Group Championships for almost two decades.