Thanks to the staunch support of Rosneft and the patronage of FIDE President Kirsan Ilyumzhinov, including a host of other supporting partners, the 1st ASEAN International Youth Chess Championships 2012 held in Singapore from 6 August 2012 came to a successful close on 12 August 2012.

The event boasted a total cash prize of $ 44,000 which is at the moment by far one of the most prestigious in the region.

Participants from 12 countries battled for honours in 8 categories. The championships were jointly organized by the Singapore Chess Federation and Nanyang Primary School and held at the latter’s premises. 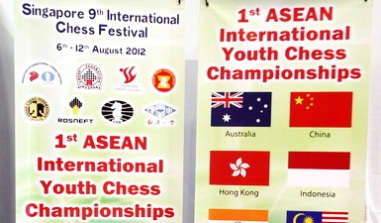 2011 World Youth Under-10 champion from China, FM Zhu Yi spearheaded the challenge in the Under-11 Open category. He finally rounded up the tournament with the gold medal from fellow compatriot Pang Tao who had to settle for silver.

FM Zhu Yi’s only blemish was a loss in round five to Singapore’s Cyrus Low Zhen Yu who eventually ended up on 9th position (on tie breaks). Vincentius Pradnya from Indonesia followed closely with the bronze medal.

Singapore’s closest neighbour stormed to a 1-2 finish when Lye Lik Zang and Ng Shi Yang both from Malaysia, took the gold and silver medals respectively in the Open Under 8 category.

Nisban Cyrus took the bronze medal with 7 points. Indonesia’s Azarya Jodi Setyaki was the best performer of the championships capturing the only full 9 points and took the honours of cleaning out the Under 14 Open category by round 8. He was 2 points clear of 2nd placed Vietnamese, CM Nguyen Van Toan Thanh who finished on 7 points. Hong Kong’s Wong Yee Chit closed out with the bronze medal. 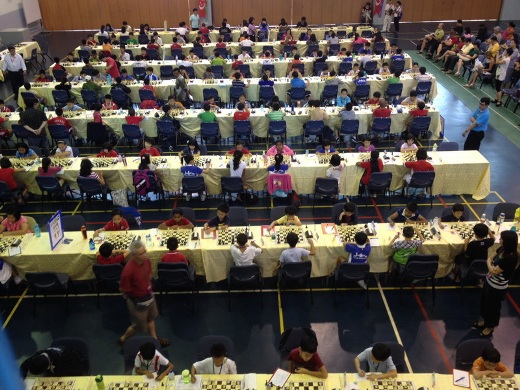 The star performer must be 11 year old Liu Xiangyi from China who captured the Under 17 Open title dropping just half a point to silver medalist Mohammad Agus Kurniawan from Indonesia.

In the Girls’ sections, Malaysia Teh De Zen also dropped half a point to finish on top of the Under 11 table and Ananya Rishi Gupta from India took the Under 8 category.

Participants who missed out can prepare for the next edition which will take place during the year-end school holidays in 2013.

Players and supporters lauded the local organizers for a job well done and were privileged to celebrate the republic’s 47th years of independence with stunning fireworks and a colourful parade at the famed Marina Bay area.