After the opening ceremony, the ECU Annual General Assembly was held in hotel Princess in Bar, with the attendance of 42 countries. 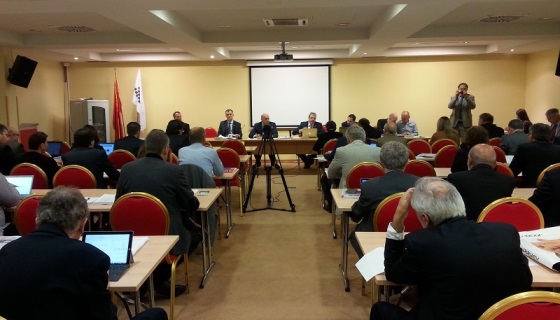 The most important decisions of the ECU General Assembly 2015:

– The changes of the statutes were approved

– The reports by the ECU Commissions were accepted.

– Kosovo was voted to become the 55th member of ECU. Any mention of Kosovo will be followed with an asterisk and the note referring to “UN Resolution 1244, without prejudice of status”.

– The budget for the year 2016 was approved. The General Assembly was informed that the income for the year 2015 is increased about 40% in comparison with previous years.

– The GA unanimously expressed its recognition, appreciation and full support to the President of Montenegro Chess Federation Mrs. Angelina Vukovic for her constant efforts to develop chess in the country, fighting in the same time against corruption in sports and chess.

– GA decided not to discharge the Board for the year 2014 because of the ongoing investigation for the period 1 January 2014 – 10 August 2014. GA decided that a letter shall be sent to the previous Treasurer Mr. Almog Burstein and to require an answer in written form to the questions related to the financial matters and his duties according to the article 49 of the ECU Statutes.

– GA unanimously confirmed that the Open Tournaments organized on 2014 in Albena and Golden Sands, Bulgaria were not the official events of the European Chess Union. None of the federations present were aware that such tournaments are related to the ECU Calendar 2014. The GA noted the absence of the representatives of Bulgarian Chess Federation to support such claim.

– With 41 votes in favour and 1 abstention, GA decided to send a letter to the Bulgarian Ministry of Sports and any other authority needed, presenting the official ECU documents related to this matter and asking all the documentation and reports that refer to alleged European Chess Union contracts, invoices and payment mandates. The letter will be sent to all related European Union authorities in Brussels as well, since the ECU is now member of the EU transparency server.

– GA unanimously decided to file a report to the US police investigation authorities for possible illegal actions by the company ECU LLC Delaware within the US territory.

– GA voted for the removal of Silvio Danailov from the position of Honorary President, with 40 agreed, 0 against, 2 abstain.