The Cyprus Chess Federation and FIDE Zone 1.10, with the support of ECU and the FIDE Events Commission, are pleased to invite the members of Zone 1.10 to the 1st Individual FIDE Zone (1.10) Championship 2014, which will be held in Larnaca, Cyprus on 21–30th April 2014.

2.1. The event will be a twelve-player round-robin event and all players will be hosted on a full board basis in Larnaca, Cyprus.
2.2. Each member Federation is invited to send one player as its representative.
2.3. The host Federation will have 2 players and the 12th player will be selected from the top 3 players of the Zone.
2.4. Players accept that they have read the FIDE and Tournament Regulations and are obliged to follow them.
2.5 The Tournament Director is Mr Paris Klerides (General Secretary of the Cyprus Chess Federation) and may be contacted at parisklerides@gmail.com or on +357 99663686, Skype account is parisklerides. 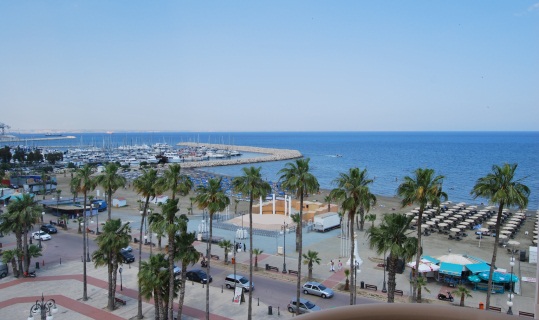 Travel expenses shall be covered by the participating Federations or players.
All players and accompanying persons are kindly asked to notify the organizers of their travel arrangements.

The transfer from the airport to the hotel in Larnaca will be managed by the organizers, free of charge. For any additional information about Larnaca we suggest the following site: www.larnakaregion.com.

The participants will be provided with full board and lodging from dinner of 21st April 2014 to breakfast of 1st May 2014.

The Cyprus Chess Federation is also pleased to host one official from each member Federation, on a full board basis, between the 27th and 30th April 2014. A meeting for the Small Nations will be held during this time and the Cyprus Chess Federation will also try and set up a FIDE Trainer’s, Arbiter’s or Organizers seminar for these officials depending on the financial assistance which may be provided by the relevant interested parties.

Any additional accompanying person will have to pay for their stay, directly in the hotel. The Zone Council will ensure that the playing hall and hotel is up to international standard.

If two or more players tie for any of the first three places, the tie to decide the awarding of the trophies will be broken (in descending order) by:
– Direct encounter
– The greater number of wins
– Sonneborn Berger
– Score Koya System

The winner of the Zone Championship will be one of FIDE president nominations for FIDE World Cup 2015.

9. Drawing of Lots and Pairings

The drawing of Lots will be made during the Technical meeting or Opening Ceremony at the start of the event. Players will be called out to select a number based on their rating with the highest rated player first.

Pairings will be made with Swiss Manager Software and pairings/results will be posted on the Cyprus Chess Federation’s website as well as on Chess-Results.com.

• The Appeals Committee will be selected prior to the first round during the Technical Meeting.
• This Committee shall consist of three members and two reserve members. Its members will be chosen by the players from their own number or from representatives of the national federations present at the tournament. The members of the Committee should belong to different federations.
• No member of the Committee is entitled to take decision in cases affecting a player of his own federation.
• The protest must be accompanied with the sum of €50 EUR, as a deposit from the signatory. If the protest is accepted and the decision changed, then the deposit will be returned back to the claimant. Otherwise money will be transferred to the Cyprus Chess Federation’s Treasury.
• Protests must be submitted to the Appeals Committee in writing, not more than 30 minutes after the end of the relevant playing session.
• The Committee shall reach its decision before mid-day on the day following the protest. Its decision is final.

Deadline for Registration is Monday 17th of March 2014.

Registrations and travel details should be sent to the Tournament Director:

For any other matter not mentioned in the General Regulations, the Tournament Director may decide according to the FIDE Tournament Regulations.