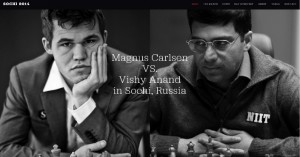 Hello everyone and welcome to the live countdown to the Carlsen – Anand 2014 World Chess Championship match on Chessdom.com!

Today is the opening ceremony day and we will follow it with live minute by minute updates as well as video from the playing area.

We start at 12:00 CET. Refresh the page for the latest news. The updates appear in reverse chronological order.

Chessbet: Predict Carlsen – Anand free and win up to 40 prizes!

The drawing of lots was performed by a magician, in the presence of two players and chief arbiter Andrzej Filipowicz. Viswanathan Anand will play with white pieces in game one, scheduled for Saturday 15:00 local time.

Chess legends Boris Spassky and Nona Gaprindashvili were in the audience. 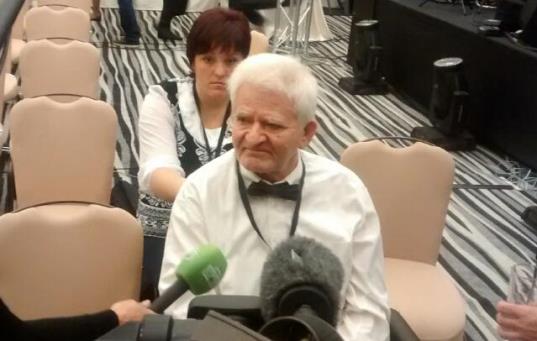 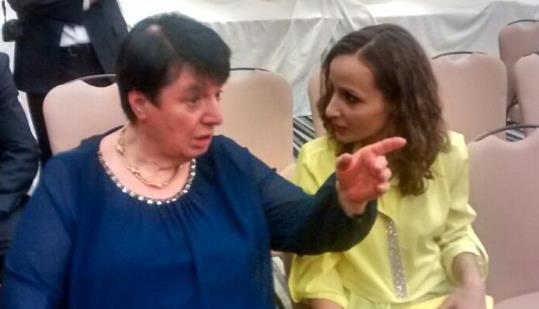 The press conferences with Carlsen and Anand live in less than 1 hour and you will be able to see it live here on Chessdom.com. Two hours later is the opening ceremony. See the photos from the venue so far and join the conversation on twitter

Scroll down for all updates of the day, and do not forget to make your prediction for Carlsen – Anand

Update on the starting times (again): Technical meeting with players at 18:30, press conference live at 19, opening remains for 20:30, all local times

Magnus Carlsen made the final inspection today, to check the board, pieces, chairs and light arrangements.

WGM Soumaya Swaminathan made a review for Chessdom.com of last year’s most interesting game of Carlsen – Anand. To get a taste of what is coming, eeplay it with triple engine analysis and comments

Tal Memorial has been one of the favorite events for the chess fans in the past years, and we have news about it from this week. Concurrently with the FIDE World Championship Match between Magnus Carlsen and Viswanathan Anand, the Russian Chess Federation will hold Mikhail Tal Memorial on 13-14th November in Sochi.

Today is a rest day at the Tigran Petrosian Memorial, but there is no rest for the silicone masters – the Top Computer Chess Championship continues and you can follow it live here, 3000+ ELO chess all day long!

TCEC will also have a special Carlsen – Anand broadcast with chat, free and open for everyone

The list of guests invited and to be present in Sochi is long – Stefanova, Kosteniuk, Gaprindashvili have already arrived, while Spassky, Khalifman, and Kramnik are expected.

One of the big curiosities for the opening ceremony and the match itself is the political involvement in the event. Vladimir Putin was the first to greet the two players upon their arrival via the Kremlin official website. The next day, Prime Minister of India Modi twitted best wishes to Vishy to 7,6 million followers

While waiting for the real action to start: If you still do not have a copy of Carlsen – Anand daily GM analysis at Chess Insider pdf magazine get one, you will receive ALL games that Carlsen or Anand played from the Candidates until and during the World Chess Championship 2014 (Sochi, Russia) match with GM commentary. That includes Candidates matches, the top games of Norway Chess, Gashimov Memorial, Carlsen’s games from the Olympiad, Carlsen’s games from Sinquefield, Anand’s games from Bilbao, a total of 1000+ pages in pdf and pgn

Yesterday the inspection by the players was successful. The new chairs were approved by Anand and Carlsen’s manager Agdestein, while the teams and the organizers assured all is ready for the event. See the updated photo gallery here (page 1 / page 2 / page 3) 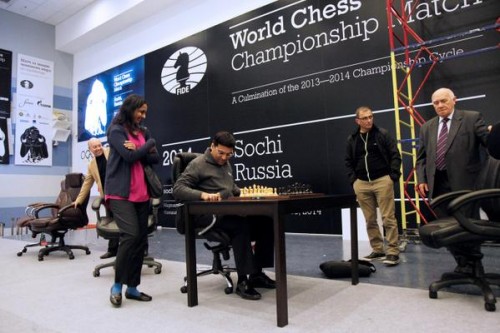 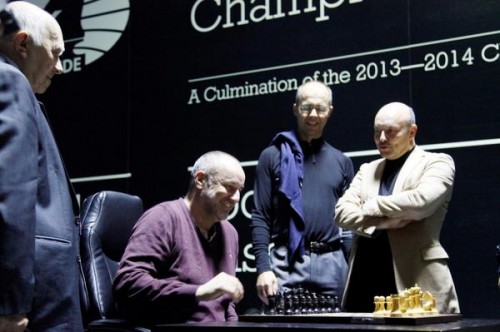 Agdestein tried the board and chair for Carlsen (photo @carlsenanand2014)

Exactly 4 hours are left to the start of opening ceremony of the World Chess Championship 2014 in Sochi. The official start of Carlsen – Anand will be given at 18:00 local time (16:00 CET).

The first game starts 8th of November at 15:00 local time (13:00 CET, 07:00 EST) see the full schedule and details here. The games will be shown live with triple engine analysis by the Top Computer Chess Championship engines Komodo, Stockfish, and Houdini at the Carlsen – Anand 2014 live games page and with chat at the Carlsen – Anand TCEC page