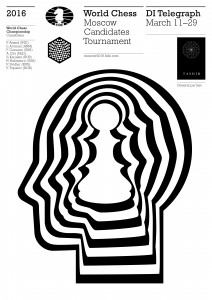 The FIDE World Chess Candidates Tournament 2016 will take place in Moscow’s digital hub, the DI Telegraph space in the historic Central Telegraph building from March 11 to 29, 2016. Eight of the world’s top grandmasters will compete for a chance to face the reigning World Champion Magnus Carlsen later this year. The €420,000 prize fund is also at stake. Tashir Group is the general partner of the Tournament.

The Candidates Tournament, considered one of the most important and grueling in the sport, will be played over 14 rounds and will feature GMs from six countries: Sergey Karjakin and Peter Svidler (Russia), Hikaru Nakamura and Fabiano Caruana (USA), Viswanathan Anand (India), Veselin Topalov (Bulgaria), Levon Aronian (Armenia) and Anish Giri (the Netherlands). (full participants list and information here)

The event is organized by Agon Limited, owner of the World Ches brand as well as the owner of commercial rights to the FIDE Chess Championship cycle. The tournament’s general partner is Tashir Group, Russia’s largest diversified industrial holding as well as one of the largest developers in the country. The event is also supported by the Russian Chess Federation.

Moscow was announced as a venue last November. The choice of the Central Telegraph building, Moscow’s digital hub that is home to many of Russia’s tech start-ups, as the Tournament venue is indicative of the organizers’ ambitions for the World Chess Championship cycle events and plans for taking chessdigital, enriching the experience of tens of million of people who follow the game online.

“Tashir Group traditionally supports major international chess events and this year is not an exception. We are thrilled to be the World Chess Candidates Tournament general partner and to bring this very exciting event to Moscow to the delight of many chess enthusiasts. We also hope this will increase popularity of chess in Russia”, says Zara Agemian, head of marketing and communications for Tashir Group, in the official press release of AGON.

“The sport went through a swift transformation: from an elite club game that it was mere 15 years ago it became one of the most popular games ever, with over a billion downloads on smartphones, millions of people from all over the world playing online every second and kids learning chess in schools. The sport turned out to fit perfectly to the age of smartphones, and we are delighted to host the tournament at the venue that represents digital culture”, says Ilya Merenzon, head of World Chess.