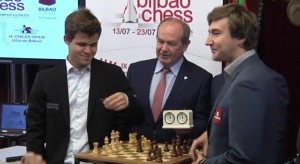 Carlsen and Karjakin in their most recent tournament Bilbao

The 2016 Carlsen – Karjakin World Chess Championship match has reportedly found a new home. The Wall Street Journal, in an article by the renowned journalist Jonathan Zalman, informs that the venue of the match will be South Street Seaport. This ended an exhaustive 8 month search for a venue and confirms Carlsen – Karjakin is taking place in New York.

This is a developing story, stay tuned for more details 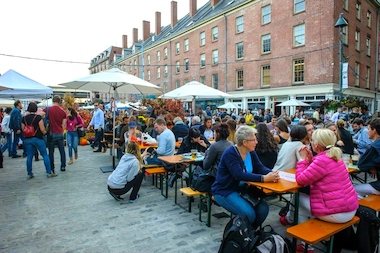 South Street Seaport during the day

Where is South Street Seaport

It features some of the oldest architecture in downtown Manhattan, and includes the largest concentration of restored early 19th-century commercial buildings in the city. This includes renovated original mercantile buildings, renovated sailing ships, the former Fulton Fish Market, and modern tourist malls featuring food, shopping, and nightlife, with a view of the Brooklyn Bridge.

The WSJ article informs that other Manhattan venues were considered for the Carlsen Karjakin 2016 match, including one in Midtown, but match organizers ultimately chose South Street Seaport because of its foot traffic and commercial infrastructure.