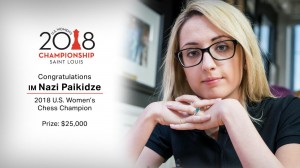 Drama unfolded during the playoff Monday in Saint Louis, as the best women chess players in the nation went head to head in a rapid chess match that was going to decide the victor.

Annie Wang has been leading the whole event and was only caught in the last round by Nazi Paikidze due to an unexpected slip against Foisor. Today she came prepared, but the nerves were stretched to the maximum for both players. The players went over the rules with the arbiter and the games started at 1 PM sharp, with Wang having the white pieces.

The opening battle was won by Nazi, who came with sharp theoretical ideas and got a dynamic Nimzo position. She sacrificed the pawn in the process, and it certainly looked as if Wang would collapse under the tremendous pressure. But that was not the case, as the youngster played a sequence of precise moves while her more experienced opponent erred almost decisively. Stabilizing the position allowed Wang to use her extra material and back Paikidze’s pieces, and the Californian super talent ended the first game with an effervescent attack.

All eyes were on Paikidze in the second game, as she was forced to win in order to remain in the match. Her strategy was good as she played a slow, maneuvering game, as well as keeping almost all of the pieces on the board. 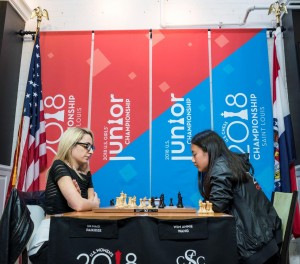 Opening was a success but once again the early middle-game started favoring Wang. Paikidze’s kingside looked broken and her attack on the other side seemed quite mellow. Wang was unable to keep her nerves in check and badly erred with 19…Nxb4? which allowed Paikidze to grab the initiative and control the game. Paikidze’s technique was impeccable, as she tied the match with a strikingly fast attack on Black’s king. We were going to Armageddon!

Immediately after the game, the arbiter of the competition alongside the players drew the colors for the Armageddon blitz match. Wang picked black! That meant she would start with less time, but she would win the title in case of a draw. Paikidze seemed happy with the outcome, as the momentum was clearly shifting in her favor. 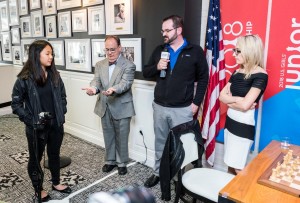 As the game started you could feel Paikidze’s ferocious energy, as she was playing at a mind-boggling tempo, pressuring her young opponent on time and on the position.

The game couldn’t go smoother for Paikidze, who simply outclassed Wang in the final moments of the match. The game was over, the players shook hands and the thunderous hall erupted into a concert of applause. Nazi Paikidze is the new, 2018 U.S. Women’s Chess Champion!