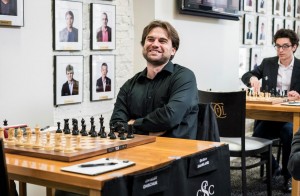 The championship rounds are always the most promising. The tension, the suspense revolving around the result, all of these and more are what makes us love chess. With only one round to go, the stakes are at their peak, and the players will battle tooth and nail for the top spot in both divisions. But first let’s look at how we got here and get right into the recap!

The two most important actors in this year’s championship play are undoubtedly Shankland and Caruana. These two have been racing against each other for the whole tournament, and the dazzling pace at which they are competing has kept others at bay.
Onischuk started the game in a promising way, but the middle game was once again only Shankland. Starting with his fierce 12…g5! Shankland took control of the game, revolving around the powerful knight on e4 and the overall control of the light squares. Onischuk was unable to tame Black’s initiative and lost a difficult R+N vs R+B endgame. Shankland’s piece activity coupled with the structural weaknesses that plagued white throughout the game allowed the leader to capitalize and take yet another step toward the title.
Zherebukh vs Caruana

And what better runner up to keep you on your toes than the world championship challenger, Fabiano Caruana. The young titan has been having the year of his life, with three tournament wins out of his last four, and a secured bid for the world chess crown. It appears he is not stopping anytime soon. The black pieces have been deadly in the hands of Caruana, who once again proved it with a smooth victory against Zherebukh, the player that made history last year when he defeated Caruana in a positional masterpiece.
That was not the case in this year’s edition, as Caruana swiftly outplayed Zherebukh in a closed Sicilian. Just like in the game of Shankland, another explosive …g5! move made its way, and after its inclusion on the board it was all over for White. The control of the important e5 square, and the drowning pressure forced Zherebukh to resign at move 31. Caruana is half a point behind Shankland going into the decisive final round.
Robson vs So

After his blistering hot start, Wesley has been unable to maintain the pace and has made eight consecutive draws. Today’s game was no different than most of the other draws: he equalized, got a slightly better endgame, but was unable and unwilling to try for an advantage. With this draw, So is out of the race for the championship, as he is one point and a half behind the leader Shankland.

This was also the round of first victories for three of the players. Nakamura drew first blood after completely dismantling Akobian’s position in a tactical masterpiece.
The two youngsters, Liang and Xiong, also had their best days at this year’s championship as they outfoxed their respective opponents in hotly contested battles. While Xiong’s victory was smooth and precise, Liang’s path to victory was slightly more treacherous, as he had to defend a worse position against Izoria before swindling him and taking the full point home.
U.S. Women’s Championship

The big clash of the round was obviously the one between the leader Wang and one of the players from the chasing pack, Zatonskih. Wang took an inspired decision when she chose to check her opponent’s theoretical knowledge in a well-known line of the Queen’s Gambit Declined.
It felt very strange to see Zatonskih entering the main line without knowing the nuances, as she burned through almost all her time before Wang was even out of her preparation. With more than an hour advantage on her clock plus a favorable position, it looked as if the young prodigy would close the show right then and there and claim the title. But it was not meant to be, as she played a few conservative moves that didn’t help her attack, allowing Zatonskih to get back and equalize the game. Wang could not be terribly upset with the result, as she remains the favorite to win it all in the last round!

Paikidze was the only player within striking distance of the leader. Being one point behind, she knew her only chance at bridging the gap was to go all out against the always forefront Abrahamyan. Paikidze’s new opening gamble was a flop as she fell under serious strategical pressure.
The pressure soon turned into a decisive material advantage for Abrahamyan. And then Caissa decided to give Paikidze the wink, as Abrahamyan horrendously misplayed the last moves of the game allowing Paikidze to force resignation right before the time control. With this victory, Paikidze narrows the gap between her and Wang to half a point, relaunching the tournament and delaying the crowning of a new champion until the last moment.
Goletiani vs Krush

Krush has been having a tournament filled with ups and downs.
The other games in the ladies’ section were drawn without much controversy, as the whole tournament seems to be currently focusing on the draconian battle between Wang and the tenacious Paikidze, who simply wouldn’t give up until the last moment.

It all comes down to the last round, where the new U.S. Chess Championships victors will be crowned!