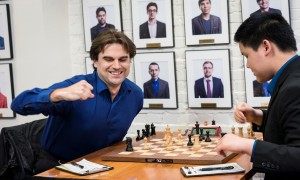 Тhe final round of the 2018 U.S. Chess Championships has been as explosive and exciting as one could have imagined. There were four players battling for glory going into today’s games: Sam Shankland, Fabiano Caruana, Annie Wang, and Nazi Paikidze. The outcome couldn’t be more dramatic!

Shankland went into today’s round as the leader, half a point ahead of Caruana. Most scenarios were surely favoring the Californian, but he could not fall asleep at the wheel. Caruana played white against Onischuk, and it was clear that the new challenger would do everything in his power to break through the experienced Grandmaster and try to catch up with the leader.
Caruana had no other option, he had to go for broke. Being in Shankland’s shoes, the strategy was much more difficult. He was playing the white pieces against the young super talent Awonder Liang, who has had a solid event up to this point. Shankland’s options were: 1. Play it safe, hope that Caruana doesn’t win or 2. Play for a victory, take risks, if a win comes your way you’re the new U.S. Champion.
For obvious reasons the choice was not easy. Shankland chose a combination of the two, he played a rather strategic and simplified line of the exchange Caro-Kann. Luckily for him, it was the young and effervescent Awonder that made his decision for him by playing the ultra-sharp 7…e5!? for which Shankland was thoroughly prepared! Shankland blasted off a precise series of moves that obviously placed Liang under tremendous pressure.
On the other side of the fence, Caruana was playing a masterpiece of his own. Outplaying Onischuk in a Ruy Lopez, which was the perfect opening for the tournament position he was in. The young challenger was playing precise, poised chess, and it looked clear that Onischuk would have a very rough day at the office. The tournament was in the air, nobody knew what would happen next. Would Caruana manage to win; would Shankland win his game as well?
Shankland understood that the situation had changed, and he now needed to win in order to secure the title. As he continued pounding on his opponent’s king with all his might, Liang remained restricted and had to watch his position crumble.
Without any counter play, Liang slowly but surely had to accept the hard truth: defeat was unavoidable. Despite Fabiano’s quick victory, Shankland kept his composure and converted his own advantage with confidence.

The show goes on in the ladies’ division, as the unexpected happened!

Annie Wang started off blazing hot, and her position against Foisor looked completely dominant. On the other side, Paikidze was playing a sharp but rather messy game against the experienced Goletiani.
At this juncture in the round things were looking great for Wang, who looked primed to win her first U.S. Women’s Championship title and become one of the youngest victors this tournament has seen.
Then, the inexplicable happened. Wang began to play disastrous moves, and quickly found herself in a sea of trouble when Foisor’s rooks found their preferred avenue on the “G” file. Wang collapsed quickly and allowed her opponent to exchange her two rooks for the queen, as well as preserve a decisive attack on her now exposed king. Foisor closed the show with confidence, as she never allowed Wang to come back into the game.
A painful loss for Annie Wang, аs soon as the game finished, Paikidze offered a timely draw and Goletiani accepted. which means that the Womens Championship will be decided in the playoffs tomorrow! 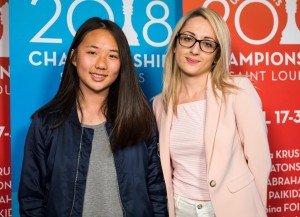