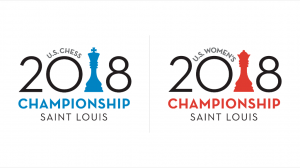 The second round of the 2018 U.S. Championships was as promising as the first. With plenty of exciting matches on the horizon, the chess fans gathered to see the players at work; they weren’t disappointed, as we once again got a combative round in the books.

Replay the games with analysis / Round 1 report

This game perfectly portrayed the difference we often see between an incredibly strong grandmaster, Onischuk, and an elite player like So. White chose to open with 1.e4 and the players soon entered a common line of the Ruy Lopez.
Unfortunately for Onischuk, his plan with Nd7-Nb6 backfired quickly when So perfectly aligned his pieces on the kingside, and accurately found the moment to break in the center and create the necessary havoc. Once the position was destabilized, white’s pieces were simply superior. So used his immaculate technique and pocketed the full point with ease.

An extremely important battle was the one between the experienced Akobian, and the up and coming prodigy, Awonder Liang. Akobian used his experience to stir the game into strategic territory, where he hoped it would be easier to outplay Liang. White quickly got his opponent under severe pressure, and could have ended the game much earlier if he would have found the killing blow 26.Nxd5!
Unfortunately for him, he did not see it and had to wait for another tremendous blunder in time trouble to finish the game. With this victory, Akobian joins So at the top of the table.

Since joining the U.S. Championship roster last year, Zherebukh has proved time and time again that he deserves to be among the best. His last year’s victory against Caruana cemented his spot and showed that he is not afraid of anybody.
Playing the black pieces against Nakamura might be intimidating, but Zherebukh kept complete control from the get go and did not allow any chances for White. The game quickly ended in a draw, and Nakamura will need to start winning very soon if he wants to keep pace with the leaders.

What started off as a tame Anti Berlin, soon regressed into a wild affair when Robson decided, in his usual combative style, to sacrifice a pawn with 22.f4! Izoria accepted the sacrifice but quickly found himself in trouble as he was unable to regroup his wandering knight back into his own base. Robson made swift use of his piece superiority and led a decisive attack against his opponent’s king. Robson is back in the mix, while Izoria will need to regroup in the upcoming rounds.

A very complex battle ensued in this game. The opening was balanced, but it looked as if Paikidze might be slightly better due to her space advantage and her upcoming minority attack.
Unfortunately for her, she timed her break badly and quickly ended up in trouble when Gorti’s knight ventured into her camp. Gorti found the right sacrifice and looked on the verge of winning the game, but her technique failed her, and she had to settle to a draw in a rook’s endgame.

This game was a heartbreak for the Championship newcomer, Derakhshani. Just like in round one, she played a great game up to a certain point, but once again failed to close the show and allowed her opponent back into the game. Krush’s experience played a pivotal role in the outcome of the game, as her nerves during the time trouble moments allowed her to complete change the position’s assessment, from losing to winning in a matter of 3 reckless moves.
Derakhshani’s loss is surely disappointing, but her morale is certainly not shattered, as she promised to come back stronger in tomorrow’s game against Paikidze. Krush is back on track, and ready to make another run for the national title!

The reigning champion played an impeccable strategic game all the way into the late middlegame, when she already amassed a decisive advantage. Unfortunately for her, Goletiani’s counter strike on the queenside shocked the champion as she completely lost the thread of the game in time trouble. The game took a wild turn when Foisor decided to sacrifice a piece and go all in into the attack. The champion underestimated her opponent’s defensive resources and after the time trouble she was completely losing if only Goletiani would have found 43…Ne6! Instead, Goletiani decided to call it a night and force the draw with a perpetual. A lucky escape for the champ!

After yesterday’s loss, Maggie Feng came to this game ready to bounce back at all costs. And she did so without much effort, as she completely neutralized her opponent’s pieces and took the full point home after a convincing performance. The result of the game was never in doubt, as she showed her class and did not let her opponent slip at any moment.