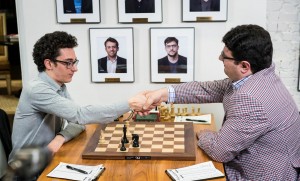 The fourth round couldn’t get any more shocking. Caruana lost after over pressing against the tenacious Izoria, while in the U.S. Women’s Championship the ladies were out for blood as they entertained the fans with six decisive results. Clearly this was the bloodiest round of the tournament. Let’s get right into the recap!

Definitely the shocker of the tournament so far. Caruana chose a Giuoco Piano and seemed to have things under control, but Izoria’s tenacity threw the young champion off, as he over pressed in an equal endgame and lost the game in dramatic fashion.

A very tense game in which Wesley certainly looked as if he could tip the scales in his favor. Lenderman defended with pinpoint accuracy though, and in the end, it was So who had to agree to a draw.
Given Fabiano’s loss, So is now tied at the top of the table with Akobian and Shankland.

Akobian came very well prepared for Xiong’s Grunfeld and it seemed as if he would be the victor of the round. Once again, the level of defense in this championship proved to be extremely high, as Xiong found all the necessary resources and managed to get the desired draw.

Robson’s preparation clearly backfired in this one, as he allowed Shankland to get a better structure early on. White failed to complicate matters in a timely fashion, and slowly but surely Shankland made swift use of his better pieces to infiltrate Robson’s position and force resignation.
Shankland scored his second consecutive victory, while Robson lost his second in a row.

Nakamura once again took unnecessary risks out of the opening, playing a double edge kingside attack. Liang patiently defended his king, while at the same time building his own dynamic play on the queenside. In the end, it was Nakamura who had to find equality which, given Liang’s riskless play, was not a very difficult task.
Nakamura remains winless, while Liang has held his own again the big three and will look to get some important victories in the upcoming rounds.

The longest game of the tournament so far, as Wang needed 106 moves to finish her peer, Yu. Wang obtained a solid advantage out of the opening and transitioned into a better endgame with ease. The conversion was far from trivial, as Yu was always looking to compensate her loss of material with her active pieces. Wang accurately defended her king and transitioned into a winning rook endgame at the right moment.
Wang is now tied with Paikidze at the top, as she presents her own bid for a national title run.

Krush has been playing shakey chess, but her experience always plays a huge role into the final outcome of the game. Once again, despite getting a worse position out of the opening, she slowly outplayed her younger opponent in a slow strategical game, focusing on Feng’s overly expanded center.
In the end, Feng did not manage to outlast Krush’s pressure as she blundered a mating net into an already difficult position.

The reigning champion needed this win. Foisor was already experiencing huge difficulties in the tournament, as her winless performance up to this moment was leaving her trailing heavy behind the leaders. And she understood that, as she took necessary risks to destabilize the position and paint the premises for a decisive attack against Gorti’s king.
Foisor’s pressure was too much to handle for the Junior champion, as she allowed an aesthetics final checkmate. Foisor get’s back to 50%, still trailing by one point and a half behind the leaders.

A match without much history. Goletiani completely misplayed the opening, allowing the aggressive Abrahamyan to get her type of position, in which she rarely fails to hunt your king down. The scenario was written early, as Abrahamyan utterly destroyed her opponent’s position and finished the job at move 30. A much needed victory for Abrahamyan, who is now back to 50%.