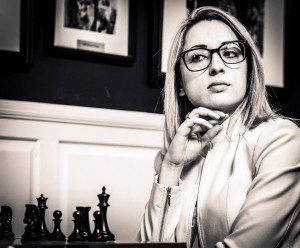 Today was a calm day in Saint Louis. The players seemed to have decided in unison to catch a breather, as eleven out of twelve games were drawn, with some of them being non-combative games. Let’s get right into the recap!

After yesterday’s disaster, Caruana was surely looking to get a game and try to bounce back. Unfortunately, doing so against a well prepared player such as Shankland could potentially bear some risks. Caruana chose the borderline suicidal 8…g6? which immediately allowed White to get a huge attack due to his lead in development and better pieces.
Caruana understood the danger he was in, and calmly accepted a pawn-down endgame. Shankland had his chances to convert, especially right before the time control with the move 40.Kh3!, a subtle and potent move that would have surely created some difficulties for Caruana. He did not find it and the players agreed to a draw only 4 moves later.

This was another game that could have surely went a different path. Izoria opened with a flexible English, and after a correctly played opening, Akobian failed to find the accurate pawn sacrifice with 13…Bb6! which would have secured a very comfortable position. Instead, he allowed the full grip in the center, and could have faced tremendous danger if Izoria would have found 15.f4!.
The game continuation was rather mellow, and Akobian swiftly exchanged the pieces, eliminated his weaknesses, and comfortably drew the game.

One of the longer games of the round. Onischuk found yet another idea in the Grunfeld (he is known to enjoy Grunfeld endgames as white) and started pressuring Robson early on due to his better structure and potential for rook infiltration.
Robson kept his cool and never allowed Onischuk to get a decisive advantage. A draw was agreed at move 51.

Lenderman came extremely well prepared for this game. His theoretical knowledge allowed him to get a significant time advantage (over an hour edge after the first 20 moves). Nakamura had to regroup and find some very accurate moves to keep the game in balance, and it was at no time in real danger despite Lenderman’s valiant attempt at destabilizing the KID. Draw was agreed at move 41 after massive simplifications.
U.S. Women’s Championship

A missed opportunity by Krush, who simply overpowered Paikidze in the middlegame, but was unable to convert her decisive advantage due to a series of inaccuracies. Nazi’s 26…Na7? was the mistake that could have costed the former champion her lead, but Krush returned the favor with 30.Ra1?! when 30.Qc7! would have sealed the deal and given Krush the victory.
Despite being a pawn down, Nazi’s resilience was rewarded and the players agreed to a draw at 56.

It seemed like this would be the game where Wang finally met her demise, but her incredible resilience and accurate play under tremendous pressure paid out handsomely once again. Gorti played a beautiful game but was unable to finish the job.
Time trouble was once again a huge factor, as Gorti started missing important resources which allowed Wang back into the game. A draw was agreed via repetition at move 64.

Abrahamyan’s French defense has been an important part of her repertoire throughout her entire career, and it seemed like today it will bring her another crucial victory. Obtaining material advantage was not enough, as Yu cleverly changed the character of the position by giving two pieces in exchange for a rook.
Abrahamyan was never allowed to coordinate her piece, and towards the end it was her who had to find the best moves in order to force a draw.

Despite being the only decisive results of the round, this game simply does not bear much historical importance. Goletiani seems to be completely out of shape, as she recklessly sacrificed piece after piece for an imaginary attack. Feng calmly collected and forced resignation when her opponent’s “attacking” ideas ran out.