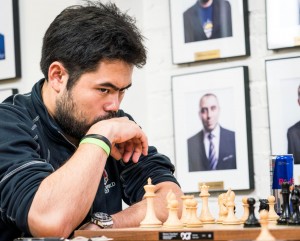 Round six of the U.S. & U.S. Women’s Chess Championships has brought important changes to the top of the standings and has cleared the path for what will surely be an explosive finish in the second part of the event. The general consensus among chess players is that the day before the rest day is always filled with decisive results, this one was no different. Let’s get into the recap!

Caruana’s Petroff is simply irresistible. The amount of knowledge and ideas that the young Challenger has in, what is considered by many to be a dry opening, is staggering. Robson was surprised early by Caruana’s pawn sacrifice and had to concede a large time deficit, that was ultimately critical in the last moves before time control.
Caruana played risky, some would argue borderline careless chess, but in the end it paid off as Robson couldn’t handle the complications and lost the thread of the game. With this victory, Caruana climbs up the ladder, and he now stands half a point behind the leader, Shankland.

A short but very complex battle ensued between these two warriors. Wesley was the first one to embrace the chaos with his 10.e4!? A pawn sacrifice that surely looked as if it would destabilize Izoria. The newcomer did not flinch, took the pawn, and decided to keep it at all costs for the remainder of the opening.
But that could have costed him, as his 13…Bc5?! could have been taxed by the very powerful sacrifice, 14.Nxe6! Instead of that, Wesley played the tame 14.Nf5 and the game soon ended after massive simplifications.

Nakamura has not been having his best tournament, especially if you look at his results from his perspective based in his expectations. He is generally a very creative, always looking for decisive results, type of player. But this event has brought him only draws, and this game was no different. Despite finally getting a serious advantage to play with, Nakamura missed his big chance when he couldn’t spot the potent 19.Nb3! or even 19.Nc4! with the same idea of temporarily sacrificing the exchange.
The move continuation allowed black to completely neutralize white’s dynamics and force simplification at a rapid pace. The game was over at move 31.

This was definitely the game of the round.
Zherebukh vs Lenderman

A game without must history, as the players seemed eager and ready to recharge their batteries during the rest day. A draw.

Except in his loss against Akobian, Liang has been an incredibly tough competitor in this tournament. He has not lost any other games, and it seemed he wasn’t even in any danger despite the massive rating average he had to face (already having played the big three). This game was no different, as he equalized quite handily with the Black pieces and forced his more experienced rival to concede a draw.

A rather tame game between the two favorites.
Paikidze played a very good opening and equalized with ease. On the other side of the board, Feng clearly did not have any major expectations from this game, as she did not try particularly hard to steer the game on a different path. A draw was agreed at move 34.

This was the battle between the leader and the bottom of the pack. Despite the massive point gap between the two, Wang was only a very slight rating favorite going into the battle.
A well-rounded game by Annie Wang, which propels her into the lead in the US Women’s Championship!
Zatonskih vs Krush

A crucial match in the Women’s section, as these two ladies have 11 national titles combined, and have been at the top of their game for the past many years.
Zatonskih’s opening did not go as planned, and despite her structural advantage, Krush’s piece activity and dynamics were utterly destructive. Through skillful maneuvering, Krush managed to break through Zatonskih’s defense and made swift work of her king’s shattered protection. The bishop pair was Krush’s best asset in this game, and her masterful use of it should be studied by young aspiring players.

This game was a balanced affair, but it was Gorti who ultimately made the last mistake and allowed Abrahamyan to garner yet another victory.
Abrahamyan’s invasion on the back ranks, coupled with a series of mating threats was too much to handle for the young Gorti, who had to resign right before the first time control. Abrahamyan has won two out of her last three games and is now approaching the podium.

In her attempt at repeating the brave performance of last year, Foisor seems to have placed too much pressure on herself, as she was unable to play her best chess in this year’s championship so far. Having the white pieces, Foisor clearly tried to destabilize the position and garner an advantage, but once again seemed to carelessly over press. Sharevich played a good endgame, but even so Foisor had a late chance at making a draw with the study-like 65.Kh6!
Unfortunately for the reigning champion, the time trouble situation did not allow her to find the best move, and she had to resign a few moves later due to Sharevich’s imminent promotion.

Another player that has not been in great shape is Goletiani, who after yesterday’s debacle was once again unable to keep control of her game. Yu skillfully took advantage of her opponent’s mistakes, and finally converted a beautiful rook endgame.

Chess players know how to have fun, and the special program – Chess After Dark – organized by the club to celebrate a successful first half of the tournament was a complete success. Players got together immediately after the round to unwind, socialize, dance, share ideas, and most importantly have a lot of fun.