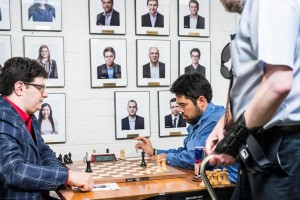 The U.S. Championships deliver once again. As expected, the players returned to the board after the rest day with renewed energy and acute desire for winning. We are entering the last stretch and the games have been explosive; let’s get into the recap and see what happened in today’s crucial round!

Everything went well for Caruana in this game. His preparation was impeccable, as the novelty 10.0-0-0 completely threw off Akobian, who was unable to find his way out of the maze. The game took an ugly turn after Caruana’s aggressive pawn sacrifice with 13.f6!
Akobian’s position didn’t withstand the pressure, and with great precision Caruana hunted down his opponent’s king. It was all over at move 30, and Caruana catches Shankland at the top of the table with 4 rounds to go.

Izoria once again delivers a huge shocker! After his win against Caruana, he now takes down another titan in a game that will surely enter the annals of history.

The last decisive result in the open section was the positional masterclass presented by Lenderman, who overpowered his good friend in a completely equal endgame. As the players exchanged the queens, it seemed as if the game would be over in no time.
Lenderman persevered and slowly started pushing Onischuk’s pieces backward. Black’s timid play was punished, as Lenderman started placing his pieces on their ideas squares, leaving Black no choice but to accept capitulation immediately after the first time control.

The young newcomer had plenty of opportunities to finish his more experienced rival. Unfortunately for him, the lack of experience at this level once again had its say. The biggest chance Liang had came early on, when Robson allowed 17.Nxc7! which would have finished the game on the spot, as Robson would lose material and fall under an utterly destructive attack.
Liang continued to press even after the game’s continuation, but the magnitude of that chance was never presented again. Robson’s tenacity paid off in the end, as he held the difficult endgame to a draw.

A very balanced game, in which Xiong looked primed to get an advantage at one juncture in the game. After playing a good Catalan and obtaining a minimal advantage, Xiong had the choice of going with the active 28.Ne4! or the less active 28.Ne2?!.
Unfortunately for him, he chose the latter and his advantage evaporated in the next couple of moves. An unfortunate outcome for Xiong, who is still searching for his first victory in this year’s championship.

A topsy-turvy game that was eventually won by Annie Wang, because of her staunch defense. She is now leading the US Women’s Championship with a full point lead!

Paikidze’s opening completely backfired when she mis-played her knights on the side early on. This allowed Zatonskih to pressure her pieces and send them back to their own base, at a loss of tempo.
Zatonskih skillfully opened the position, and it seemed as if Paikidze’s king would not see the end of the tunnel. Fortunately for her, Zatonskih’s time trouble addiction once again kicked in and she failed to convert her advantage. A huge draw for Paikidze, who remains in close contention for first place despite her horrible start to today’s game.

A fun game for sure! Yu opened with 1.b4 and soon was facing a difficult position. That’s when the fun began, as Yu boldly sacrificed a piece for two pawns and an impressive center. Despite the sacrifice’s dubious feel, Feng was unable to deal with the complications and ended up being much worse in no time.
Yu’s pawn avalanche in the center was decisive, and the youngster wins consecutive game, placing her at a respectable 50% score.

Derakhshani got an almost decisive advantage very early on, as Abrahamyan did not know how to react to her opponent’s early theoretical ideas. In the ensuing endgame, White’s bishop pair coupled with the passed “h” pawn should have been decisive. Unfortunately for Derakhshani, her lack of form once again proved decisive as she allowed Abrahamyan back into the game through a series of inaccuracies.
Once Black regained control, the draw agreement was reached.

Goletiani’s bad form was once again the culprit, as she failed to tame a fairly simple position and blundered the game with the inexplicable 31…Rc6?? This huge mistake was swiftly punished by the young Gorti, and the game ended just a few moves later.