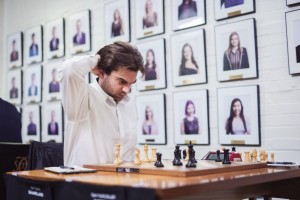 Another exciting round in Saint Louis, as the favorites to win the event have once again showed their good form and continued their respective streaks. The most important change after today is at the top of the open championship table, where Shankland is now the sole-leader. Let’s get right into the recap and see what happened in today’s critical round! 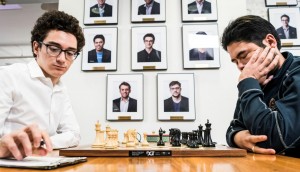 A dramatic game ensued between these two titans of the chess world. Nakamura came extremely well prepared, and his theoretical knowledge allowed him to gain a serious advantage on the clock, as well as a more pleasant position on the board.
Caruana was on the back foot the entire game and could have been severely punished if Nakamura would have played the piece sacrifice he intended to. Instead, Nakamura hesitated to deliver the blow and Caruana was able to harmonize his defensive forces. The game ended in a draw when Caruana found a nice repetition.

This was not the most exciting game of the round. Akobian was obviously not in the mood to take any unnecessary risks after losing three games in a row. His cautious play determined the outcome of the game, with Wesley not looking to destabilize the position in dramatic fashion. The players agreed to a draw at move 35.

This was a much more interesting draw. Lenderman showed impeccable opening preparation and was looking like he might be able to pull yet another victory, which would have been his third in a row. Robson defended tenaciously, but even so, Lenderman should have capitalized on his magnificent advantage with the move 21.Qa4! which would have secured the victory.
After missing the easy tactic, Robson was able to regroup his pieces, finish his development, and fully equalize the game. It ended in a draw at move 71.

The most important game of the round was the tenacious fight between the leader, Sam Shankland, and the young Zherebukh.
Shankland managed to win and took the lead. 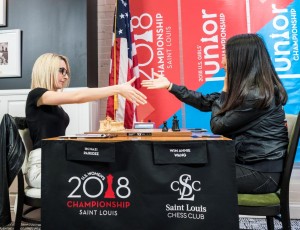 The game that held the most weight this round was the clash between the leader, Wang, and the runner up, Paikidze.
Despite playing a rather sharp opening, Paikidze’s opposite castling did not intimidate Wang, who immediately activated her pieces and started creating problems for the former champ. The tension could be felt, as none of the players were willing to take unnecessary risks. Wang had everything to lose, while Paikidze feels like she could catch up with the youngster in the remaining games. A draw was agreed via repetition at move 30.

A very good performance by the 7-time U.S. Champion, Irina Krush. The experienced Grandmaster stirred the game into the direction she wanted, an easy to press position with a stable, long-term advantage.
Krush dented into her opponent’s structure, created the isolated pawn, and used her great technique to secure an important victory.

This combative game between the two youngsters was the last game to finish. The players entered an equal endgame, but Feng immediately erred with the overly ambitious 30…e4? This allowed white to corral the advanced pawn and secure the victory with ease after obtaining the material advantage. Feng played all the way until checkmate but could have resigned much earlier.

Goletiani seems to have found a new wave of enthusiasm and motivation after being interviewed by Maurice. While Sharevich might not have played her most precise game, it is important to give praise to Goletiani’s spotless game. Black checked all the important points: she equalized, created a weakness in her opponent’s camp, and capitalized on it with great precision. Sharevich was forced to concede when her opponent’s forces invaded her camp.