World School Chess Championships 2013 were concluded after the exciting ninth round that was played in Porto Carras this morning.

In the closing ceremony the winners were greeted enthusiastically with rounds of applause and cheering.

Remember the name Bagul Ezizova. The little girl from Turkmenistan smashed through the competition in the U7 section to take the title with perfect 9/9 points. Her play is strong and mature and we should except big achievements in the years to come.

Amina Kairbekova from Kazakhstan is second with 7,0 points, while Ratnayake R M Dinithi Panchal from Sri Lanka is third with 6,5 points. 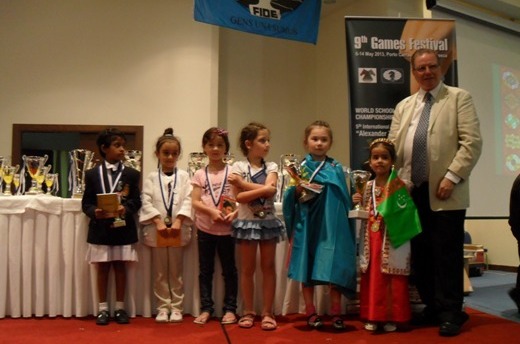 In Open U7 Yesuntumur Tugstumur from Mongolia took the gold medal with 8,0 points. Konstantin Okin from Russia is second with 7,5 and Umid Aslanov from Azerbaijan is third with 7,0 points.

In the Girls U9 WFM Bibissara Assaubayeva from Kazakhstan justified the top rating and won the event with 8,5 points. Diajeng Theresa Singgih from Indonesia fulfilled the hopes of her sister WGM Irene Kharisma Sukandar and took the silver medal with 8,0 points. Third is Ananya Rishi Gupta from India with 7,0 points.

European Champion FM Tsvetan Stoyanov from (Bulgaria) convincingly won the Open U9 with 8,5 points, leaving the second placed Mihnea-Ionut Ognean (Romania) a full point behind. CM Ozenir Ekin Baris (Turkey) took the bronze medal thanks to the superior tie-break among the players with 7,0 points each.

In Girls U11 Olga Badelka (Belarus), Aleksandra Maltsevskaya (Russia) and WCM Sude Hereklioglu (Turkey) were involved in fearless race from the very beginning of the tournament. Badelka finally clinched the gold with 8,0 points, Maltsevskaya won silver and Hereklioglu bronze.

In Open U11 Artem Trubchaninov (Russia), who had a furious start with 5/5, was eventually caught on the shared first place by FM Abdulla Gadimbayli (Azerbaijan). Nevertheless, Trubchaninov won the gold on better tie-break, while Azeri player took the silver. Danila Pavlov (Russia) earned the bronze after edging Ramazan Zhalmakhanov (Kazakhstan) on tie-break. 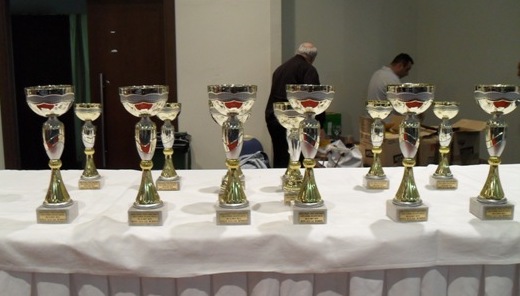 The U13 might have been the most exciting sections! Among Girls, with a last round victories WFM Anastasia Avramidou (Greece) and Olena Martynkova (Ukraine) caught up with the earlier leader WFM Caballero Quijano Mitzy Mishe (Peru) on shared first place with 7,0 points each. Additional criteria was consulted to break the tie and finally Avramidou took the gold, Caballero Quijano silver and Martynkova bronze.

In U13 Open there were as many as four players on the shared first place with 7,0 points each. After tie-break, the gold goes to Fahim Mohammad (France), silver to Valeriy Kazakovskiy (Belarus) and bronze to FM Temur Igonin (Uzbekistan). Zhandos Agmanov (Kazakhstan) should get the consolation prize for remaining on 4th place.

Irina Drogovoz Irina from Russia totally dominated the Girls U15 section by completing the event with 8,0 points and leaving the nearest followers point and a half behind. There followed three players with 6,5 points each – WFM Katsiaryna Beinenson (Belarus) with silver medal, WFM Aay Aisyah Anisa (Indonesia) with bronze, and Anastasia Yakimenko (Russia) on 4th place.

U15 Open had a truly dramatic finish! The earlier leader Miradil Zeynalli (Azerbaijan) won the game by forfeit, as his opponent Pavel Chernyshov didn’t show up, to finish the tournament on 7,5 points. Zhanat Saiyn (Kazakhstan) also won to collect a total of 7,0 points.

The last game to finish was the top board clash between the top seeded IM Vahap Sanal (Turkey) and David Zakaryan (Russia). The Russian needed a victory and therefore pressed for six hours, almost delaying the closing ceremony, but his opponent defended with precision and eventually draw was signed. 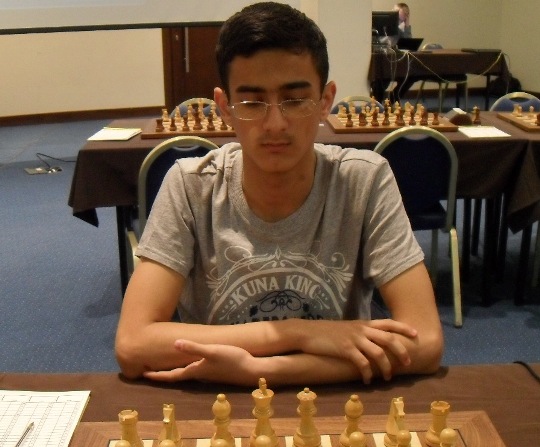 Denitza Dragieva from Bulgaria was never in doubt of winning in the Girls U17 section. She concluded the event with 7,5 points and took the gold medal. Bikakhanim Zamanova (Azerbaijan) is silver with 6,5, while Viktoria Yakimenko (Russia) won the bronze after edging other players that finished on 5,5 points.