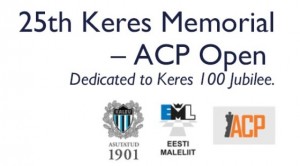 The 25th Keres Memorial – ACP Open will take place from January 8 to January 10 in Tallinn, Estonia. It features the names of GM Nepomniachtchi, GM Svidler and GM Kovalenko as the top 3 seeds. The tournament will host 161 players from over 20 federations; 72 players are from Estonia. There are 35 GMs and 1 WGM participating in the tournament. The game system used will be 15 minute games with 10 second increments in 11 rounds of Swiss matches.

The event is dedicated to the 100th birth anniversary of chess grandmaster Paul Keres who was elected the Estonian Sportsman of the 20th Century. The competition celebrates the birth anniversary of one of the greatest chess players of all time. Paul Keres was member of ESA Kalev and always represented sportsclub in all his matches. ESA Kalev is the oldest and biggest sports organization in Estonia, which was founded in 1901. ESA Kalev as main organizer is keeping the memory of Paul Keres alive through this tournament. The competition is part of the ACP 2016 Tour.