Many chess tournaments took place in Pardubice during the last week. One of the most important and star-studded was rapid chess tournament, in which also very strong chess players took part.

“This is one of the strongest rapid tournament and we are really happy about the interest for taking part in it. Especially we are very glad to have GM Movsesian and GM Laznicka in start list almost every year,” said director of Czech Open Jan Mazuch. The winner of this tournament was GM Sergei Movsesian. „It was a preparation for a main tournament but I’m very happy that I won,” said the winner. 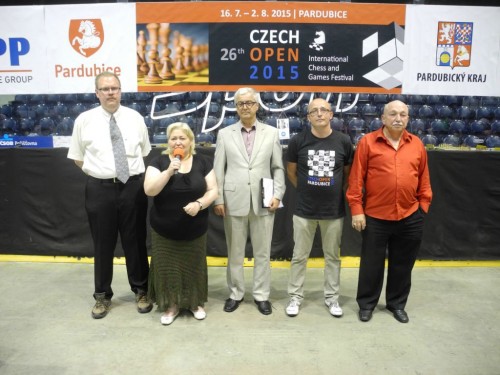 This rapid tournament was played also as open Czech Championship. The best Czech player was IM Vojtech Plat. “I am much more satisfied with final standing than with my performance. I was very lucky,” commented his victory IM Plat.

The main Grand master tournament Pardubice Open has also started on Friday, July 24. The total of 289 players registered, including those from Korea Israel, India and many European countries. “In this tournament, we have many players, who are really great and we are glad that many people abroad are interested in our festival,” said Jan Mazuch, the director of Czech Open. On the main event of festival also play 34 GMs, 48 IMs and 61 FMs. “The starting list is very strong, like every year for that matter. I think that this year’s competition is the best in last few years,” summed up Mazuch.

Number one seed for this year is GM Laznicka Viktor (2657) from Czech Republic, who came from Pardubice. Laznicka is waiting for his first victory in Pardubice Open. Number two in starting list is GM Sergei Movsesian (2653), winner from year 1995, so he has a chance win after incredible 20 years.

In the first four rounds there were 3 players who won all their games, among them GM Laznicka (Czech Republic), GM Popilski (Israel) and FM Bagi (Hungary). Every year came to Pardubice a lot of foreign players, who no one knows, and they made a lot of surprises in tournament. “The strength of this tournament in Pardubice is the relatively easy way of attaining the grandmaster title, as there are so many grandmasters here that you play them almost all the time, even if you are a weaker player. At the same time, there are many players from abroad here, which is another condition for attaining the GM,” explained the festival chess expert, IM Petr Pisk.

Tournament organizers have prepared a surprise for fans from around the world. They can watch live broadcast from first chessboards on youtube channel. The link is on the official website of the Czech Open.