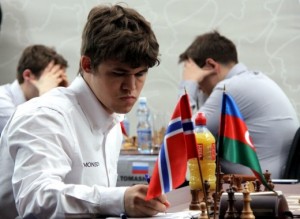 January 2013 FIDE rating list has three players with rating over 2800 ELO. Magnus Carlsen’s rating record has been made official by the World Chess Federation, as now he is sitting on top of the list with 2861 points, after a 13 points gain during the last London Classic. Second position in the rating list is for Vladimir Kramnik with 2810 ELO, who overtakes the third 2800 club player, the Olympic champion Levon Aronian.

An interesting month is ahead, as with the coming Tata Steel Chess 2013 Magnus Carlsen will be trying to improve his own rating record for the first time. He will play in the A group of the competition, where some of his main opponents like Caruana and Karjakin are also going to take a shot at entering the 2800 ELO club. The 2700 club will also be very active with the 2013 Gibraltar Chess Festival and the Tata Steel 2013 group B. All games from Tata Steel and Gibraltar will be live with computer and GM analysis at Chessdom.