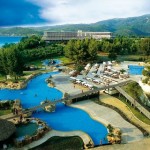 World Champion Magnus Carlsen is the highest-rated player of the event and will make in Porto Carras his last competitive appearance before his World Championship Match vs Fabiano Caruana in London, in November.

Participation in 34th European Club Cup is open to:

With 74 teams participating, 62 in the Open section and 12 in the Women’s section, and over 120 GMs, many of them travelling directly to Chalkidiki from the Batumi Olympiad, ECCC 2018 promises to be one of the most successful and exciting events ever held in Greece!