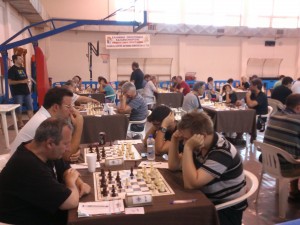 130 participants, from 14 countries take part in “Ikaros 2014” tournament that is held for 37th consecutive year at the island of Ikaria. The organizers of the event are the Municipality of Ikaria and Ikaria Chess Club, while the sponsor of the tournament is the shipping company Hellenic Seaways.

Game analysis, mainly of the younger participants, is provided by I. Kourkounakis who is also involves in a large part of the side-events.

The side events of 17th of July include a “live” chess game (with kids and students of Ikaria Chess Club actin as the pieces) at the central square of Aghios Kirykos and a guided tour of the tournament participants by A. Kalali at the Cultural and Folk Museum of Ikaria as an initiative of the local Cultural Club “Ioannis Melas”.

The side events of “Ikaros 2014” will continue after the tournament on 21st and 22nd of July but also throughout the rest of the summer. More information will be available at: http://www.ikaroschess.gr