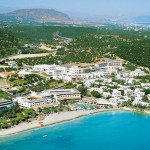 The 3rd Anogia “Capablanca Memorial” IM-norm tournament is held from 11-19 September 2018 in Anogia, Crete, Greece. The tournament is part of the Heraklion IT Grand Prix, which is in its 8th year, and is part of a series of closed norm tournaments. It is a 10-player invitational round-robin event. Players receive 90 minutes for 40 moves, followed by 30 minutes to the end of the game, plus a 30-second increment starting from move one.