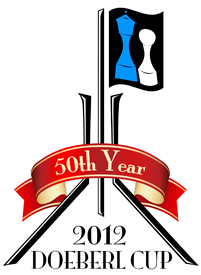 The 2012 Doeberl Cup, 50th in a row, is taking place from 4th to 9th April at the Hellenic Club of Canberra in Australia. The Olympus Room provides the main playing hall for the event. An $17,850 prize money pool is on offer.

After four rounds of play in the Premier Tournament there is a massive group of 8 players in the joint lead with 3.5 points each.

The Doeberl Cup is the longest running weekend chess event in Australia. Since 1963 it has been held every year in Canberra, Australia. Grandmaster Ian Rogers holds the record for the most number of wins (either outright or on tie-break) with 12.