Four players, grandmaster SP Sethuraman and Vidit Santosh Gujrathi of PSPB, international masters P. Karthikeyan and Arghyadip Das of Railways shared the lead with three points each at the end of the fourth round of the 53rd National Premier Chess Championship organised by Tiruvarur District Chess Association, at Kasi’s Inn, Tiruvarur today.

As hitherto co-leader Vidit Santosh Gujrathi was indisposed in the morning, his game with MR Venkatesh started three hours later.

In an absorbing struggle arising from Catalan opening, both Sethuraman and GM M Shyam Sundar of AAI played an attacking game. After exchanging the queens, Sethuraman managed to win a pawn on 34th move, resulting three chain pawns to him, compared to that of two isolated pawns to Shyam. In a rook and knight ending, Shyam committed hara-kiri by exchanging the rooks and the extra pawn helped Sethuraman to secure a valuable point in 57 moves. 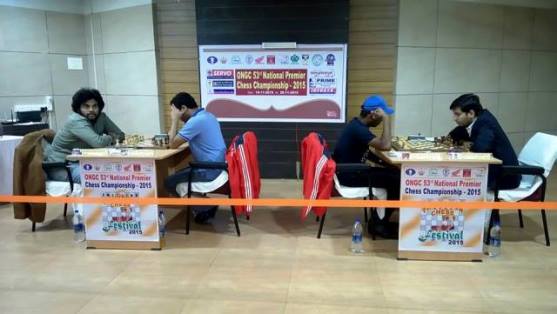 Two games had connected pawns on a- and b- files in the end game, both of them producing victories. IM Arghyadip of Railways, who is in good nick, threatened to queen his a-pawn and Praneeth transferred the attack to king side by sacrificing his knight. Unperturbed Arghyadip accepted it; sacrificed his bishop and posted his rook on seventh rank, leading to a winning combination. The game ended after 37 moves in Arghyadip’s favour.

IM Swapnil Dhopade of Railways held the upper hand against his team mate IM K Rathnakaran in an English opening, lasting 47 moves. His connected pawns on a- and b- files had a decisive advantage, in addition to a knight outpost. When Rathnakaran had to lose his knight to stop the marching a- pawn of Swapnil, the end in favour of the latter was not far off.

Likewise, pawns on a- and b- files could not produce a win for P. Karthikeyan in a Reti opening against GM Deep Sengupta of PSPB. Though Karthikeyan had an extra pawn, Deep had a stout defence in the opposite colour bishop ending and repeated the position to get away with a draw.

Sixteen year old grandmaster Karthikeyan Murali of Tamil Nadu recorded his second successive win in the tournament by beating GM Neelotpal Das of PSPB in the exchange variation of Spanish opening. Karthikeyan played an enterprising end game, pocketing a pawn on an unexpected 31st move. When Neelotpal doubled his rooks on g- file, planning for a lethal attack, Karthikeyan sacrificed his rook for a knight to obtain an unassailable position and Neelotpal had no hesitation to resign immediately.

In the fast paced Neo Grunfeld defence between former Commonwealth champion GM Abhijit Kunte of PSPB and international master P. Shyaam Nikhil of Tamil Nadu, the players exchanged all the pieces except opposite colour bishops to reach a draw position after 26 moves.