Vidit Santosh Gujrathi of PSPB maintained his unbeaten record and a lead by full point, defeating the second placed P. Karthikeyan of Railways in the ninth round of the ONGC 53rd National Premier Chess Championship, organised by Tiruvarur District Chess Association, today.

Karthikeyan Murali of Tamil Nadu moved ahead of Karthikeyan to second place with six points, winning over his team mate P. Shyaam Nikhil.

In the Closed Catalan game, both Vidit and Karthikeyan played a cautious and error free middle game. A good combination of pieces led to the loss of exchange to Karthikeyan on 25th move. Though Karthikeyan won a pawn on the 32nd move, Vidit’s control of long diagonal by his queen and bishop daunted him. Karthikeyan resigned on 36th move, when he was about to lose his knight. 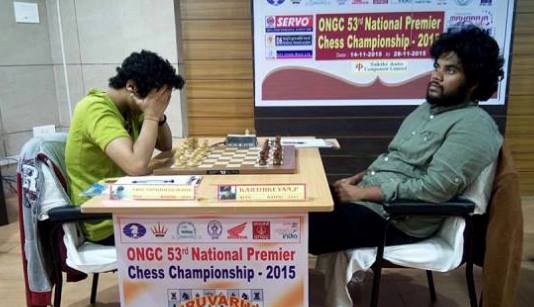 Karthikeyan Murali is on a roll, as he has secured five wins and two draws, after first two rounds loss. The victim in this round was his team mate P. Shyaam Nikhil, who preferred to play Modern defence. In the middle game, Shyaam lost two valuable pawns and when Karthikeyan won one more pawn, Shyaam did not hesitate to resign on the 36th move.

In a wild game, IM Arghyadip Das of Railways accepted the queen’s gambit by IM Swapnil Dhopade also of Railways and both had premature pawn movements. On the 16th move, Swapnil made a wrong knight manoeuvre, resulting in the loss of two pawns. Swapnil posed threats to Arghyadip’s king with rook and bishops. Once the king reached a safe position protected by his pawns, Arghyadip counter attacked and grabbed another pawn to win the game.

GM Neelotpal Das of PSPB started his defence against IM K Rathnakaran of Railways with the Kopec system of Sicilian defence. Rathnakaran gave up his rook for a knight, hoping to push the two connected centre pawns. Neelotpal had a completely commanding position and was about to march his pawn to eighth rank, but moved his rook, allowing Rathnakaran to make perpetual check and escape with a draw.

In the Bishop’s opening encounter between the two Tamil Nadu GMs M Shyam Sundar of AAI and MR Venkatesh of PSPB, the former played an attacking game. But, Venkatesh defended patiently to get away with half a point.

K Praneeth Surya, playing against the third highest rated player Deep Sengupta was on par with his opponent throughout the game. He drew the game comfortably by constantly threatening Deep’s king in a queen and pawns ending.