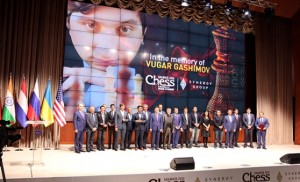 Photo by the Russian Chess Federation

The dates of the Shamkir Chess 2018 international tournament dedicated to the memory of late Azerbaijani GM Vugar Gashimov have been revealed. The chess tournament will be held in Shamkir on April 18-29. The tournament is a 10-player round-robin with a total prize fund of €100,000 and €25,000 for first place.

Live games with analysis will be provided daily on Chessdom with the best chess software competing in the Top Chess Engine Championship – Komodo, Houdini, and Stockfish.