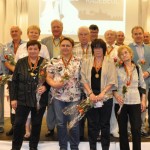 From the 7th to the 15th of July 2018, the chess world will be looking at Radebeul near Dresden in Germany.

We can proudly announce a new participation record. Never before have there been so many teams registered for this kind of tournament.

Over 580 chess players in 127 teams will compete against each other to obtain the title “World Champion” in the categories 50+, 65+ and in the women’s section.

They will be traveling to Radebeul from 25 countries on 4 continents.

Covering the furthest distance will be the players from Canada, the US, South Africa, Singapore and Iraque.

Of course the defending champions – the Russian Women, Russia 65+ and the team Saint Petersburg in the category 50+ – will be in attendance.

In the 65+ category Russia leads the field, narrowly followed by the opponents from France and Germany.

Many teams from the hosting nation, Germany, are registered for the tournament as well. That is the beauty of chess – ambitious amateur teams can compete with world class teams in one and the same tournament.

Further information can be found under the following link: http://schachfestival.de/world-team-championship-50-65-2018-en.html.