It was a very peaceful day as all five Classic games ended in draws. In the most anticipated clash of the day, Carlsen thought he had a minimal edge on the white side of a Berlin, but Caruana defended perfectly to hold a rather comfortable draw. Carlsen was still in a cheerful mood at the press conference, as his advice to kids watching was to ‘keep more pieces on the board than I did today’. 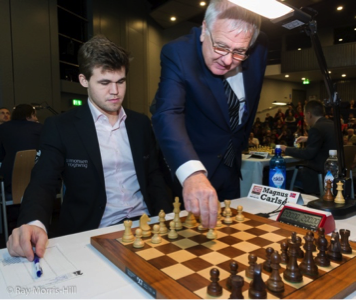 Carlsen and Caruana were not the only ones to call it a day before even making time control, as the encounters Aronian-Anand, Giri-Adams and Topalov-Grischuk were all drawn before move 40, despite the Sofia rules (meaning players cannot agree a draw unless there is a repetition) being in effect here. The spectators were thus left with the game between Hikaru Nakamura and Maxime Vachier-Lagrave, which didn’t disappoint as the players delivered what was clearly the most thrilling encounter of the round. While it was first Vachier-Lagrave who had the upper hand, he missed a promising continuation and the advantage swung over to Nakamura, before the players repeated moves and a draw was agreed on move 57. So after 2 rounds, Anish Giri is still in the sole lead with 1.5 points, as he is the only player to have won a game so far. Tomorrow we can look forward to a remake of the last two World Championship matches, as Carlsen takes on Anand with Black. 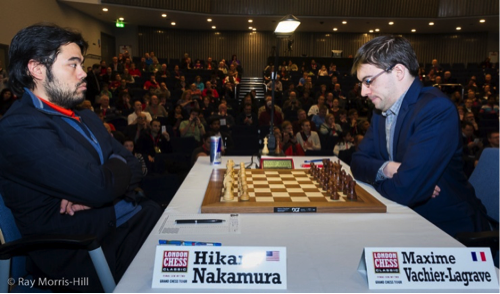 The most exciting encounter of Round 2: Nakamura vs Vachier-Lagrave

As for the actual chess action, Anish Giri was the only winner of today’s first round, as he mated Veselin Topalov, after the Bulgarian lost control of his advantageous position. While Vachier Lagrave-Carlsen, Anand-Adams and Caruana-Aronian were all balanced draws, Nakamura achieved a winning position against Grischuk, but ended up missing a couple of chances and had to settle for a draw.

In the FIDE Open there was a double round today – the only one of the tournament – and after 3 rounds, there are still 10 players left with a perfect score. One of those players is the top seed Evgeny Postny, but a more surprising co-leader is Krishna Crg from India, who was only seeded 51st. Things promise to heat up tomorrow, when the first boards will all feature GM clashes.

Today was also marked by the beginning of the 3rd London Chess Conference, which is being held at the Hilton Olympia Hotel. The conference runs from 5-6 December and is organised around the topic of ‘Chess and Society’. This includes talks on how chess can help prisons, libraries, refugees, alcoholism and depression, amongst others. You can find all the details about the conference on their official website, Facebook page and Twitter account.

You can now read John Saunder’s excellent detailed report of round 1 on the London Chess Classic website and the one from today’s round 2 will be available soon. You can also find photo galleries of the Classic, the London Chess Conference, the junior events as well as other events (such as the British Knockout Championship Final and the FIDE Open) on Ray Morris-Hill’s website. All the results and tournament details are up on the LCC website, while you can download the PGN files of the games by clicking on the following links: