Tickets are now available for the 7th London Chess Classic, which, besides being the strongest tournament ever to be held on British soil, will also decide the winner of the inaugural Grand Chess Tour.

This is your chance to watch ten of the world’s very best players, including World Champion Magnus Carlsen, battle it out at the Olympia Conference Centre in Kensington, from December 4-13.

Daily tickets cost £20 each, while the season pass is a bargain at only £100, which is 9 rounds for the price of 5! Entry is free for women and under 25s (UK residents only) and all you need to do is register online.

Tickets include access to the Auditorium, where the games will be played, as well as to the live Grandmaster commentary room and all other festival events areas. 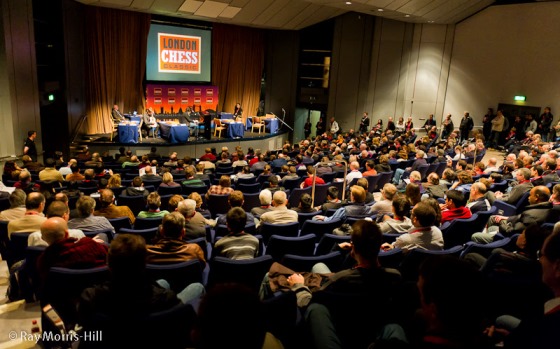 However, if watching the action of the Classic is not enough, you will have plenty of events to choose from in what is the UK’s largest chess festival. The 9 round FIDE Open offers GM and IM norm opportunities and has a guaranteed £15,500 prize fund. For those with less time on their hands, the weekend and weekday tournaments provide the opportunity to still play 5 FIDE rated games. The festival will culminate in a (FIDE rated) Super Rapidplay Tournament (with a prize fund of over £13,000) on December 12-13.

The 3rd Chess and Education Conference will take place on December 5-6 and more details on this event will follow shortly.

As in previous years, the festival will also feature junior and school events, simuls, blitz tournaments, as well as numerous other fun side events.

You can find all the information about the different events on the official London Chess Classic website. Here, you can also enter online for the FIDE Open, weekend tournaments and Super Rapid, as well as download the entry form and of course buy tickets for rounds 1-9 of the Classic.