The event features all the world’s Top 10 players, except the World Champion Magnus Carlsen and Sergey Karjakin. 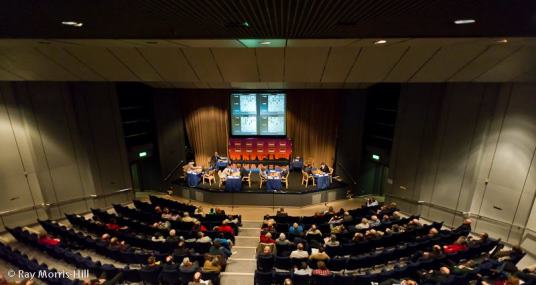 London Chess Classic is one of the four events in Grand Chess Tour series, played in 9 rounds with the time control 40 moves in 2 hours, followed by the remainder of the game in 1 hour, with a 30-second increment from move 41.

The first round starts on Friday at 4.00 pm UK time (5.00 CET) with the following pairings:

Aronian vs Adams, Nakamura vs So, MVL vs Giri, Caruana vs Anand, and Kramnik vs Topalov.

Apart from the main event which is played in the Olympia Auditorium, there are many side events which will be held within London Chess Classic, such as Pro-Biz Cup, simuls by Jon Speelman and John Nunn, free events all week for children and numerous tournaments: FIDE Open, Weekend Classic (Open U2050, U1825, U1600, FIDE U2050 & FIDE U1750), Super Rapidplay Open, etc.

One of the most interesting events for the domestic audience is the British Knockout Chess Championship, which starts today in Hilton hotel. Eight players compete in a knockout tournament for the £20,000 first prize. David Howell defends the title, and here are the remaining 7 players: Nigel Short, Gawain Jones, Luke McShane, Jonathan Hawkins, Nicholas Pert, Jonathan Rawson and Daniel Fernandez.

The highlight of the festival is certainly the London Chess Conference, supported by the Chess in Schools and Communities.

The Conference takes place from 10-12 December 2016 at the Hilton Kensington Olympia. The theme of the Conference is “The Didactics of Chess”.

The European Chess Union is one of the sponsors of this year’s edition of the Conference.

On the last day of the Conference, a design competition for the best original classroom chess exercise involving collaborative problem solving will take place, with €1,000 prize fund, sponsored by the ECU.